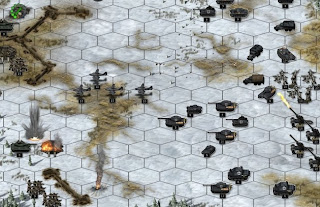 As a PC strategy game, Tank Operations: European Campaign grabbed me immediately with an interesting concept; it follows the American campaign in Europe during World War 2. Most World War 2 strategy games focus on the European struggle in Europe (with the Russian campaign being the most intriguing for many). When the World War 2-based games do focus on the Americans, it’s typically the conflict with Japan in the Pacific. 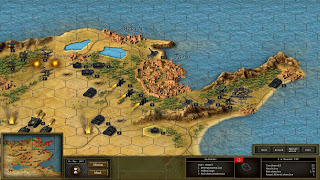 So I was very interested to experience a relatively unique series of battles in a strategy game. Unfortunately, Tank Operations: European Campaign is also very much a casual strategy game by wargame standards, and so it’s a title I wonder whether the PC strategy fans will care for.

Initial impressions are generally good – players are presented with a nice big map in their very first mission, and the promise of a classic war theme; a beach storming. Against seemingly overwhelming odds players are tasked with taking the American military offensive from the ocean onto the land of North Africa to capture Casablanca, Morocco. The big map promises plenty of room to make strategic plays, and the range of units is healthy enough to create that sensation of strategic depth.

But from there the game quickly reveals its limitations. In terms of presentation units don’t really animate, and the interface is unappealing, with too-small text, blurry unit icons, and hard-to-follow combat resolution. Maps are absolutely sprawling, but the strategy happens at a snail’s pace – it can take several turns to take down critical enemy targets such as bunkers, and because the maps are so large it takes forever and a day for the enemy AI to play through its turn. There’s little incentive to make use of the large geography either because while terrain has an impact on battles, there’s no sense of the finer strategic features that we expect from PC wargames; no supply line mechanics is an especially painful one. Nothing is more rewarding than manoevering units to successfully cut enemy supply lines, and yet it’s a common tactic that we just can’t employ here in any meaningful manner. 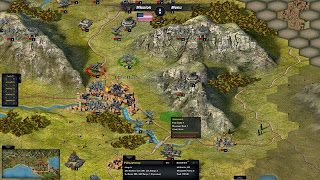 The AI itself is straight from the Advance Wars school of strategic thinking – that is to say it’s virtually non-existent and completely predictable. Within a couple of turns I had figured out how to bait my enemy targets into making strategic errors. In any given turn it’s obvious which targets each enemy unit is going to target; typically it’s either the bases or the units where it has the best match-up. It’s a far cry from the more inventive AI systems that we see in plenty of games now that are capable of surprising people by setting up critical plays over a couple of turns, or reacting to a player action in a seemingly unpredictable manner. AI is a notorious – and yet critical – challenge for strategy game developers to overcome, and unfortunately in this case, it’s too predictable for its own good.

On the positive side of things, I liked how units had secondary (typically more powerful, but use-limited) attack options for when you really needed to change the flow of a battle, and there are some basic supply mechanics in play – planes and tanks can run out of fuel, and bullets can run down. Again it is no deeper than anything we’ve seen in the likes of Advance Wars, but it is at least something to think about.

Because of the size of the maps battles can be quite drawn out, and because there’s quite a few battles to play through Tank Operations does provide value for money. The only real question is whether you’re going to prefer playing something as relatively straightforward as this on your PC when your Steam account can easily also have the Total War, Civilization and Europa Universalis titles. In that context, it’s unfortunately difficult to recommend this one – it would have made far more sense as a release on the 3DS or Vita.