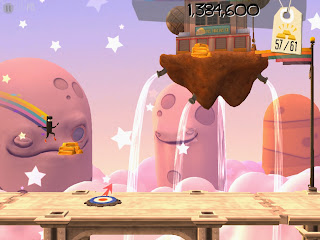 Imagine running through an odd, magical world where monocle-wearing hills with eyes sitting on clouds (they are referred to as “Cloud Titans”) watch you as you jump, slide, and kick your way through joyously rhythmic level after level. Sound familiar so far? It should – that’s BIT.TRIP at its finest. But then, suddenly, everything stops working. The music continues playing as the rest of the game grinds to halt and in no time at all you are dead and are forced to restart the level. That is not the platformer of the year I love.

Enter BIT.TRIP RUN! on iOS, the quasi-remake of Runner2, a fantastic console and PC title that released earlier this year. Not a whole lot has changed gameplay-wise in the move to mobile, but everything from the menus to the controls have been adapted to fit the touch screen interface of the iPhone and iPad. Other mobile additions include not-entirely unwelcome in-app purchases in the form of extra levels, silly costumes, and virtual gold, and iOS-specific leaderboards and achievements. 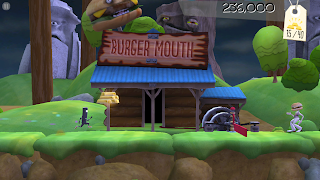 Although the basic game remains intact, I will describe it in case you have not played Runner2. It is yet another auto-runner, featuring a multitude of moves and mechanics to mix-up the musical monotony. Playing the game, or at least playing it successfully, is not wholly unlike reading the alliterative previous sentence. When you are bouncing from boingy-pad to boingy-pad, collecting every piece of gold and soundtrack-enhancing power-up, and allowing the beautiful background to blow past you, BIT.TRIP RUN! is at its best. The oft-made comparison to perfectly playing an instrument is apt; the objects on-screen are sheet music and you are the person at the piano.
Now onto the things that differentiate this version from the original. RUN! is by its very nature a slightly more relaxed, “casual” affair. Considering how intense an experience playing Runner2 is, that is not saying much. Small tweaks are visible everywhere, from the points-awarding “TAP!” targets that have been added as rewards for taking the “hard” path in a level to the enemies in the first world that now telegraph when you should tap the screen to jump over them. Care has been taken to make RUN! more accessible in response to platform and audience, and it shows. 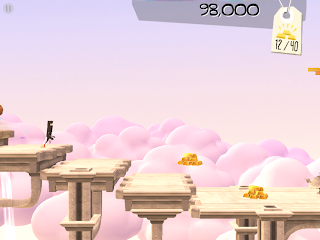 The in-app purchases are neither off-putting nor enticing; in fact, they do not really impact the game much at all. They are just there, and one of the most unobtrusive examples on in-app purchases we’ve seen to date. It seems like Gaijin Games felt obligated to include an option to buy the aforementioned levels, costumes, and gold (which simply allows you to buy more levels and gold) with real money because RUN! is on iOS title and as a result there may be players who would prefer to buy the game’s hidden content outright instead of playing enough to unlock it. Maybe the studio will make a few extra bucks, but there is no player-facing downside.
What is the main flaw of this otherwise phenomenal game? As I alluded to in the introduction, my experience with this game was often riddled with frame rate drops and slowdown. They seemed to occur at random; they varied from level to level and sometimes even cropped up in separate playthroughs of the same level. I often tried removing the game from the multitasking menu and restarting when things got unplayably bad, which temporarily fixed the issues. The bottom line is I usually had an amazing, glitch-free time, but when things got bad, the frame rate did not drop so much as crater. For a game that requires rhythm and precision, this is unacceptable.

It was enough to make my consider not recommending it to anyone without a device that has the latest specs (for the record, I played it on an original-generation iPad mini). BIT.TRIP RUN! would be my favorite game on iOS, but sadly it just does not run well enough.