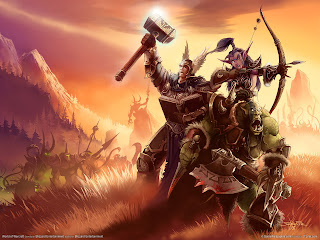 That title is not a euphemism. According to The Guardian, the NSA really has been infiltrating games such as World of Warcraft and Second Life (digression: I think perhaps the only people still playing Second Life are NSA agents).

Why are they doing this? Why, they’re terribly frightened that that pointy-eared elf over there is actually planning a terrorist attack or something. Apparently there were attempts, too, to recruit potential informants from the games’ tech-friendly users. Because running amok with hairy panda men is clearly the best way to recruit a legion of digital counter-terrorists.

See apparently, according to the NSA document written in 2008 and titled Exploiting Terrorist Use of Games & Virtual Environments, the fact that there are millions and millions of people playing online games made said online games a haven for potential terrorists to hide in plain sight. In other words that romance I shared with a she-troll back in the summer of 2009 was quite possibly an al-Qaeda recruitment guy trying to get me over to Afghanistan. I thought it was something special, but apparently it wasn’t to be. 🙁 (Please note, NSA, in the event that you are reading this because your massive and completely misused datacentres picked up the word “al-Qaeda” – I have no affiliation with that group and yes, I am making fun of you. For being a bunch of Orwellian zealots).

Now, in all fairness to the NSA, if terrorists were looking for a way to communicate in an alternative channel to the typical phones and emails that they know the NSA can listen in on the moment a whiff of concern arises, than the fast that online worlds are just so darned social would surely make them an inviting opportunity for a planning party.

On the other hand, in addition to everything else that the NSA has been sticking its nose into and been caught red handed doing thanks to the nice Mr. Snowden, this is going to (rightfully) feel like yet another breach of privacy. At a time when we’re already dealing with the idea that Microsoft is being so close lipped about just how much information it is providing the spy agencies around the world courtesy of that HD camera that it’s now installing in every lounge room called “Kinect,” it doesn’t surprise me in the slightest that my gaming Twitter feed is looking rather angry right now.

It raises all kinds of other questions, though. Are those red souls invading my game in Dark Souls really other players, or just NSA agents making sure that I don’t become too powerful and become a cult leader? Are the cops in Need for Speed Rivals AI, other players, or real police trying to teach me a lesson about speeding before I go and try it in the real world? Are there more hopelessly inefficient ways for intelligence agencies to try and keep tabs on the population than by invading their video games?

I have got to say, it makes me realise two things; 1) I am very sorry for whatever intelligence agent was the one that tapped into my Kinect when I was naked dancing in Just Dance. 2) I am very glad that intelligence agents aren’t able to monitor my activities in offline games like Persona 4 and the Atelier games.

Or did I just say too much?

The 24 Games of Christmas! Day #10: Atelier Meruru Plus: The Apprentice of Arland