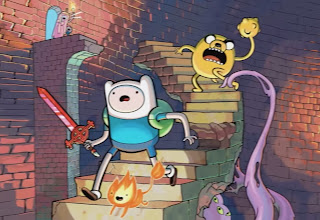 Wayforward is usually reliable. Even when it’s building licensed titles it’s usually reliable (Thor on the DS is a truly great brawler). And while Wayforward is well known for its platformers, it has proven that it does understand dungeon crawlers with the excellent Silent Hill: Book of Memories on the PlayStation Vita.

So sorry, Wayforward, you’ve got no excuse for how truly bad Adventure Time is. I went into this expecting a decent dungeon crawler. Instead I got a game that redefines just how cynical licensed cash grabs are.

In theory it should be a fun experience; it’s a game with access to the popular and entertaining Adventure Time characters, and it’s fundamentally a roguelike experience with eight playable characters and randomised dungeon designs that go on and on and on – there’s 100 levels all up in the game. As someone who is always up for a good roguelike, I was immediately attracted to this title’s potential for clean, simple fun. 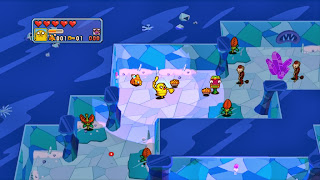 That attraction disappeared as soon as I realised that the game has no experience system. Loot collected in a dungeon can be exchanged in the hub world for some limited, minor upgrades to characters, but there is no experience system whatsoever in Explore The Dungeon. The roguelike genre is a simplistic one at the best of times thanks to the nature of random dungeon generation meaning that there’s a limit to how complex the traps or puzzles can be. What keeps players going is two things; a steady sense of progression from finding better equipment and levelling up, and the persistent fear that character death has consequences in a roguelike. With most games in the genre, it’s a drop back to level 1 with no equipment.

But Adventure Time has none of that. There’s no sense of character progression thanks to the complete absence of statistics to manage and experience points, and there’s no real fear of failure. Dying dumps you back into the hub world and forces you to replay a couple of dungeon levels (which is a kind of torture, I guess), and you’ll lose whatever secondary weapon you had on hand at the time. Because these secondary weapons are dropped constantly it’s not much of a punishment. 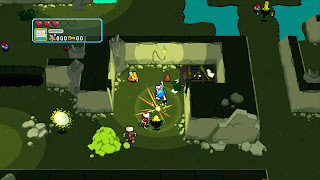 The rest of the game involves running around a dungeon beating up enemies using a single attack buttons and looking for the stairway to the next level. The only other thing to even consider is when to use the super attack, which clears the immediate area of enemies. The answer to that is pretty simple – when there’s a lot of enemies around. I wish I was exaggerating, but that is the extent of the game. With no equipment system Wayforward wasn’t able to implement an interesting range of enemy designs with unique strengths and weaknesses; what you see in the first level is much the same to what you’ll see in the 100th, and with no real magic system or meaningful variety in the character types, there’s just nothing here that will let the players know that they are indeed working through the game and being rewarded for it.

On the 3DS there’s no chance for the game to connect with players even if they could look beyond its simplicity. The multiplayer on the home consoles, which could have been a saving grace because everything is more fun with friends and beers, is gone (and to prove how lazy this port is: the first boss makes a joke about multiplayer, despite its lack in the game). And on the original model 3DS or 2DS, the sprites are so tiny on the screen that it’s hard to tell what they’re meant to be. On the 3DS XL this is less of an issue, but players will still need to contend with bland, uninteresting environments, stock enemy design, and a horrible implementation of 3D.

There is absolutely nothing that redeems this game. Once you’ve played through the first level you’ve fundamentally experienced everything that the game has to experience, and because there’s no real sense of progression as you play, the temptation will be there to take it back to the store for an exchange after that first level.

My deepest sympathies if this game is under the Christmas tree this year.

Nintendo and Tecmo Koei are collaborating on a Zelda Warriors game!