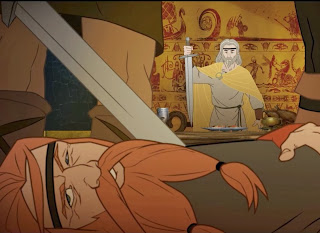 The Banner Saga was a successful Kickstarter campaign back in 2012 and now the full release of the game is right around the corner.

The appeal of The Banner Saga is immediately obvious; it brings the same gameplay elements found in games such as Fire Emblem and Final Fantasy Tactics. Drawing from Norse culture, The Banner Saga also brings a fantasy world to live thanks to its stunning hand drawn art style.

Most of the content in the game is found in the battles. Your heroes move around the board attacking enemies, with the objective of defeating all of your opponents. The turn order has been approached in a way that brings some much-needed life into the genre. Turns (the opportunity to move units, attack, and so forth) alternate between the player and the opponent, not unlike in a game of Chess. In larger battles the amount of time that units spend not doing anything can impact the final result, which adds a layer of strategy that we don’t see in some other examples of the genre. 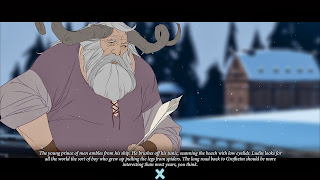 There is a simplicity to the battles themselves. Each unit has two main stats, Armour and Strength. Strength depicts the amount of hit points a unit has while armour changes how much damage a unit takes. By damaging the armour levels of your opponents allows for greater damage to be dealt to the strength stat.

I did have a few issues with the battle system; features in other tactics games that I’d become complacent about and not appreciated until it was taken away from me. When you move a unit, there’s no option to undo the movement. As a strategy game, I was constantly thinking about possible moves, but my ability to experiment was somewhat hampered by the permanency of my actions. There’s also no way to check if a unit can attack an enemy unit until after they have moved. It’s not an issue once you become really familiar with a unit’s abilities and attack range, but it’s a unnecessary learning curve at first.

Outside of combat, you have to control your camp, ensuring there are enough supplies to feed the convoy. Run out of supplies and the convoy goes mad, eventually starving to death. The rewards you get from battles are used to buy supplies, while also being used to level up your heroes. It’s a nice touch to extend the strategy beyond the battlefield. 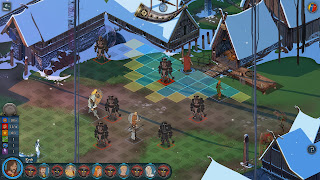 What The Banner Saga does so well is the presentation of the characters and the environments. Nearly everything in the game is hand-drawn and it adds a beautiful touch to cutscenes, dialogue sections and even the world map. The way in which these hand-drawn characters are animated adds so much to the game. The flapping of the collar of a shirt in the wind, the way axes weigh down the arms of units wielding them.

Whilst the visual presentation is great, the game completely lost me when it started telling me everything that the characters were doing. There’s a deep story in The Banner Saga and most of the information is given through dialogue sequences. In-between the dialogue there were italicised parts of text that were telling me the actions of the characters. I understand that as an indie game, it’s difficult to cover the costs of fully animated cut scenes, but more needed to be done here; it’s not enough to tell a narrative through a drawing of a character with a static expression on their face. Show me what the characters are doing rather than losing my interest and forcing me to click through the walls of text that followed. 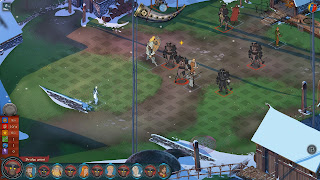 There’s a lot to like about the narrative that I have seen, but unless the developers quickly patch in a more expressive storytelling delivery mechanism I fear they’re going to lose a lot of potential fans. For those that can sit through the text there are delightful Mass Effect-style moments where you have to choose between moral options in conversations. Even in the first few moments of the game I could tell I missed out on seeing certain parts of the game because I picked a different direction in my dialogue. I can just imagine how varied this game will be but unless you are interested in the vast amount of text, you’ll just be staying for the battles.

The Banner Saga hits the nail on the head when it comes to the battle system and those hand-drawn animations. If you’re the kind of person who can be invested in a game and its characters on an emotional level by reading loads of text, then this may well be the first game you buy in 2014.