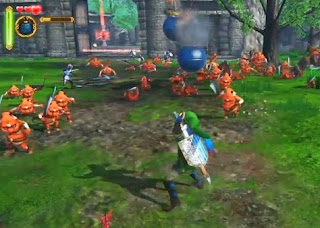 As everyone who knows me knows I have a slight obsession with Tecmo Koei’s Warriors franchise, and I love how the developers over there keep turning the formula to a range of different Anime/ Manga and JRPG franchises.

A Zelda Warriors (tentatively titled “Hyrule Warriors”) game on the Wii U is perhaps the strangest release yet in the franchise, but absolutely, completely welcome.

Announced on tonight’s Nintendo Direct, all we got to see was a brief bit of action, but it was enough to sell me on the idea. It’s going to be exciting to follow this one in the future, because the Warriors franchise is most famous for a range of features we don’t see in Zelda games – dozens of playable characters for a start.

However it turns out this will be a big boost for the Wii U in Japan, where the Warriors games are typically chart toppers, and for obvious reasons this will be an exclusive to the Wii U.

If you’ve never played a Warriors game before, why not go grab Dynasty Warriors 8 and get a feel for just how entertaining this franchise can be?