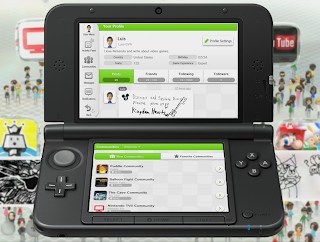 News by Matt S.
It’s been a while coming, but Nintendo’s promised Miiverse has finally been released on the 3DS console.
Next time you try and log in to online services (specifically the eShop), you’ll be told you need to make a system update. The most important feature of this system update is of course the Miiverse social network, which has been a popular feature on the Wii U over the past year.
So now (assuming you haven’t got a smart phone or tablet, which has had a Miiverse app for some months now), you’re going to be able to access your Miiverse account while on the go, making posts and overwise engaging with your Nintendo fan buddies.
From a quick play with the new app, it works quite nicely – if anything it’s a better user experience than the Wii U’s version. It was a quick couple of taps to link my Nintendo Network account to the 3DS Miiverse app – the added benefit there is, finally, if I add $30 to my Wii U account the credit is shared across devices and I can now access it from my 3DS.
Once I was into Miiverse I was greeted by a breezy, easy interface with icons nicely laid out to maximise access. On the Wii U every game that has been released has a Miiverse sub-community for fans to post in. On the 3DS this obviously isn’t the case – in Australia there’s only 25 or so, and there’s some odd exclusions. For instance, Harvest Moon: Tale of Two Towns has a Miiverse community, but the far more recent Harvest Moon: A New Beginning does not. That said I would expect to see many more Miiverse communities to pop up in the coming weeks.
As with the Wii U version of Miiverse, it’s possible to “favourite” communities to keep up to date with the chatter on your favourite games.
All up, it’s a great little addition to the 3DS. It’s good to see Nintendo embracing more non-gaming apps on the 3DS. YouTube was a decent step, and now Miiverse allows people to message one another and will help organise multiplayer games, something that was desparately lacking from the console previously.
Matt S.
Editor-in-Chief
Find me on Twitter: @digitallydownld
I’m on Miiverse too! WaltzIT
Share this