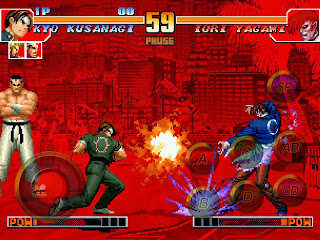 The king of the arcade games was the fighting games. There was always something appealing about going into a local arcade, whacking a dollar into the machine and button mashing your way to a victory. When fighters made the jump onto the console, they got a fresh lick of paint, but they held onto that brawling, button mashing goodness that made kids flock to the arcade.

However, the experience when playing these fighters at home was also different. I loved playing on the arcade machines. Perhaps because I was fighting for the most value out of my money as possible, but there was something different about the console experience, and I do think fighters lost something core to the experience as the arcades died away.

Although I hadn’t played The King of Fighters before, the iPhone experience took me back to time when I could sink coin after coin into an arcade machine and be immersed in a gaming experience. 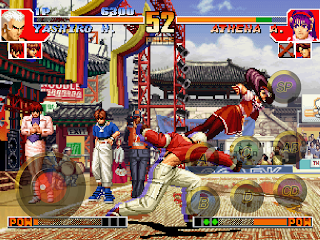 Having said that, I want to start with the elephant in the room with all iPad games – the controls. It’s hard for many people to imagine playing intense, fast action games like fighting games using touch controls. KOF97 won’t really change people’s opinions of that. One of the great things of the fighting genre is the ability to button mash. You could sit down and learn all the strategy you can, but until you get really good a beginner has just as much chance of beating you by mashing the control pad, unintentionally unleashing a special move barrage that would impress the pros (assuming they were fooled into thinking it was a deliberate move).

It’s one of the great levellers that makes fighting games so playable in a group setting. The iPad has too big of a surface space for rapid-fire button mashing on a touch screen. Having only played this on an iPad, there is a chance that it may have been easier on a smartphone. It’s hard not to be disappointed by the controls but this is a challenge for all tablet gaming and the game gives you the opportunity to customise this which is definitely a positive. 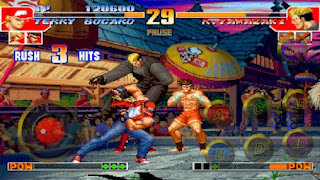 KOF97 is one of those games that even if you don’t like the genre, you will have a bit of fun with. Not that the gameplay is amazing (because compared to other games, it’s not), not because the characters are those that you will definitely love (not being aware of this game previously, there are no familiar characters to me), it’s a game that takes you back to your childhood gaming adventures. The developers have done a great job in resisting any urges to update the game.

Those familiar with the game will love it as well, even though there have been several iterations since the ’97 version, and the later games are a definite improvement on this one. There’s bluetooth support for local multiplayer, which is an essential element for a fighting game. Otherwise the game’s fairly thin on features; there’s a tutorial, help options and the single and multiplayer game options. That’s about all you need for a game like this.

If you love fighting games, whether it is specifically the King of Fighters series or not, this game will give you warm fuzzy feelings inside. It reminds us of a time when the genre was simple and uncomplicated. While not perfect, King of Fighters 97 brings back great memories of your childhood but also makes you long for the arcade simplicity that seems to have passed us by.

Got a 3DS? Now you got Miiverse