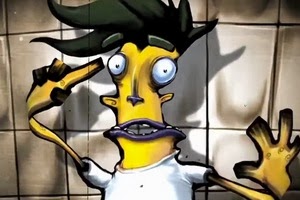 You would expect a game that has been written by the guy that did Adventure Time to be a little crazy, and Stick It To The Man is indeed a little crazy.

It’s a game that really revels in being self aware and providing quite juvenile humour to an adult audience. Somehow within that context it also manages to offer a mature (but sadly forgettable), adventure/ puzzle game with some real mind twisters.

This is a game whose story really needs to be experienced first hand (this made making a video about it rather difficult frankly, but check out the video review to get a feeling how the game works from its first level). But without giving away the narrative and leaving people to experience its many gags and puns; in this game you play as a regular Joe who was hit by a nuclear bomb thing and ends up with an invisible (to anyone but him) pink arm sticking out of his head. Because this arm gives him amazing ability the big evil “The Man” takes a personal interest in our inadvertent here, and from here the adventure starts.

If you’ve played any of the classic point-and-click adventure games, from Sam & Max through Grim Fandango or Monkey Island, then you’re pretty much set for what this game is also going to offer. You’ll wander from place to place solving increasingly complex puzzles by using the pink hand’s ability to read minds and tear stuff out of the environments. Yep, there’s a touch of Kirby’s Epic Yarn in there too thanks to the rip-friendly nature of the 2D paperwork environments. 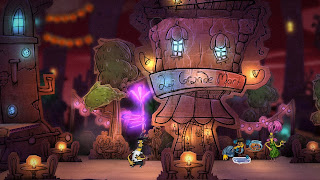 With all that said if Stick It To The Man didn’t have a really delightful sense of humour then it would be a very stock-standard and forgettable game indeed. The humour is targeted directly at people who have been playing games for years and have built up a healthy respect and love for some of the silliness that happens in this industry from time to time. If you have played the NES Silver Surfer, or if you’ve played enough 2D platformers that a joke about having to move to the left, rather than the right, will make you laugh, then you’ll get a lot more out of this game than someone for who the references are lost.

Because the game is relentlessly linear, if you do find yourself stuck (and the puzzles are difficult enough that if you’re not a long term fan of the point and click genre it’s entirely possible that you will get stuck), then there’s two options available to you: a FAQ, or the PlayStation button to quit. The humour is enough to help push through those moments of frustration, but the games industry that has many players that don’t like getting stuck any more, so it’s a fair warning to say that the solution to the game’s puzzles are not always immediately evident.

With that said, the game is nowhere near as difficult as some of the other examples in the genre, such as The Cave. A bit of creative thinking is enough to get through Stick It To The Man, and that’s just as well, because the storytelling is a lot more fun than the rather uncreative puzzles that comprise most of the gameplay experience.