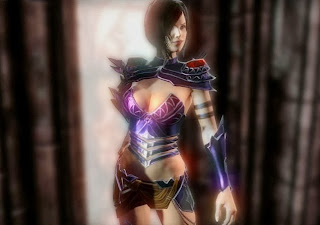 Blood Knights is one of those games that is a little difficult for me to get a handle on, because I walked away from it feeling as though I enjoyed it more than I probably should have. There are some good ideas, even if none are completely fresh and new. The problem is in the execution, which misses the mark more often than I would have liked.

Players take on the role of a vampire hunter Jeremy, who is trying to aid holy templars in a quest for a powerful seal that vampire are attempting to take for themselves. Jeremy is then magically bound to a vampire that is being forced to serve as a guide and fight against her own people as the game’s mechanics are introduced through a series of heavily scripted stages. Near the end of this chapter, Jeremy is turned into a vampire and he is now exiled by the very people he was attempting to help.

(Worth noting: Matt was far less of a fan of this game than I was. You can read his review here)

The story’s premise is always circling around these events, which should have been intriguing, yet it never really gets to take a front seat here. The voice acting is not terribly convincing most of the time, and the characters look better standing still than they do when moving through cutscenes. Over the course of the adventure, you get a handful of dialogue opportunities where you can answer questions in a way that tends to favour humans or vampires, good or evil. There are a few interesting moral shades of grey tossed in along the way, such as the opportunity to deal with a priest who turns against his people to save his own skin, but overall the character depth feels a bit too shallow to become heavily invested in either Jeremy or Alysa (that being the female vampire companion). 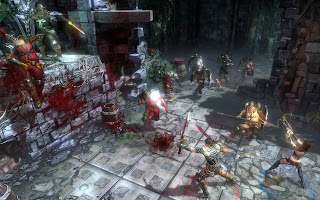 The two characters have a distinctly different feel in combat, with Alysa operating off of a somewhat awkward ranged combat system, and Jeremy who is a physical warrior. The combat is meant to beat your characters up regularly as this is mostly an action title with some mild platform elements presented in a mostly overhead view. Some RPG elements are sprinkled in as well, with a leveling system, traits that can be purchased, skills that can be improved and armour and weapons that can be purchased or found along the way to equip.

Most of these perks and pieces of gear offer only very small incremental improvements, but later in the game I swapped out my current gear for some lower level stuff just to see what the difference was, and I was pretty quickly abused by my enemies, so while the actual sense of progression is not considerable, some credit has to go for balancing the system against increasing enemy difficulty.

In a single player game, you can switch between the two characters with a press of a button. Most of the time I used Jeremy, but I am a fan of the warrior types in most games. However, there is also a local multiplayer option that actually made things more entertaining. The second player can drop in or out pretty much at will, so my son jumped in midway through the second chapter. He took on Alysa and I used Jeremy. 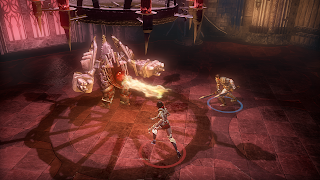 While I still cannot go so far as to say Blood Knights is ever a great game, it was a good deal more fun with two players. For one, the combat felt considerably better balanced, and boss fights were more entertaining as well. We actually had to develop some strategies that involving me tanking and him firing away from a distance. This opened up some puzzle elements in the environment as well that were not there in single player. The most notable of these is how Alysa can pick up and throw Jeremy with her powers, and Jeremy can levitate her up into the air and pull her toward him.

These mechanics came into play in areas such as a series of jumps where Alysa had to stand on a button that caused a bridge to extend. She could then pick up my character and fling him across a gap onto a small island. From there I could hop Jeremy over to the other side and then pick up Alysa and draw her to me. Two player definitely added to the combat and puzzle solving in ways that the otherwise repetitive hack-and-slash single player did not.

All that said the game very much falls into an average category even with the second player. There are some interesting ideas at work here that fall quite short of realising their potential, giving the impression that the team’s resources kept them from reaching what they were grasping for when making Blood Knights. A fair effort, but one somewhat lacking in the end.

Video review: Stick It To The Man (PS3)