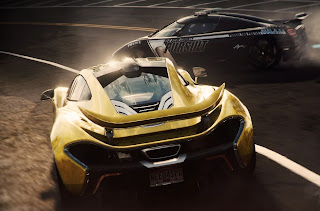 It’s built right into the title: Need for Speed Rivals is all about competitive racing with other, real, people. Some of these people will be street racers. Others will be police cars. It doesn’t matter which at any point in time though because the entire game is all about going really fast face-to-face against other people.

Displayed prominently on the map as you drive around is the position of other key racers. Running up to them will engage them in an impromptu street race for points and glory and things. In doing that racing however, you’ll be building up a “heat” meter. The higher that is the more aggressive the AI police will be in chasing you down, and the more attractive you’ll be for the human-controlled police cars. Both sides have nasty little tricks to pull on the other side; much like Mario Kart but with more spikes and less colour. If Rivals relied solely on coded AI then it would be a fairly pedestrian and exploitable experience, but thanks to the dynamic AI otherwise known as the human brain Rivals provides a thrilling experience with a truly incredibly sense of speed and action around every corner.

Rivals is, of course, an arcade racing game, and as such there’s less focus on perfect racing lines as putting the pedal to the metal and powersliding around awesome corners. As you’d expect for such a game the racing environment itself is a masterfully constructed playground filled with shortcuts, jumps, and opportunities too show off your powersliding ability. The environment itself is also nicely detailed, though it must be said that the scenery is typically whipping by so quickly that it’s impossible to appreciate it. Car models look amazing though, and given that that’s the the main thing you’ll be watching, this is just as well. 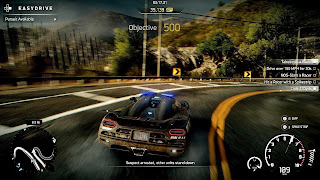 Racing well earns points and these points are used to upgrade the cars. To give players due warning; unlocking everything in Need For Speed Rivals is going to take a lot of grinding, and as intense as the experience is, the game features an interesting quirk whereby the best points are earned by having a high “heat” meter, but if the police bust you then all those points go to whoever is controlling the car. A clever risk/ reward mechanic or just plain mean? I lean towards the latter, though it’s fun to be on the receiving end as a police car and banking all those lovely points.

Between races the game offers an empty but open environment to drive around. New races are clearly marked on the map, but it’s useful to be able to pick and choose the order in which you do races and scout out the environment for shortcuts and the like before committing for the real deal.

Rivals is part and parcel for the modern Need for Speed experience, and in general I’m a fan of the highly social and fluid approach to racing that EA has built into the franchise. There’s a constant sense that there is something to do in the game, and that these challenges will be different every time I log in, because the real competition here is person vs. person. 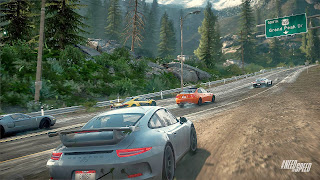 I’m also a fan of EA’s second screen experience. When you’re not at home playing the game on the TV, rather than working through an inferior iOS clone, the Need For Speed Network instead allows me to continue to interact with my game. I’m able to lay down traps or help my friends escape the police. It’s a simple app (though it seems to have been deliberately constructed to appear to offer more than it does), but it works and it encourages me to continue playing the single, connected Need For Speed experience regardless of where I am. The way that Cloud is able to enhance my favourite games like this has got to be my favourite technology development to impact on this industry in some time.

With all of that said, I do have some reservations on this game. It might just be a consequence of being the maiden title from EA’s new Ghost studio, but Rivals lacks the class of Need For Speed: Most Wanted (still my favourite title in the series, ever). Admittedly it’s difficult to compete with a game that kicks off with a Muse montage, but beyond that Rivals feels that touch more aggressive; rather than make escaping from the police feel exciting it’s like this game wants you to feel good for smashing up rival cars. It’s a subtle shift in tone, but not an entirely welcome one. I like my racing games slick and focused on how awesome my cars are. I’m less of a fan of using my car as a battering ram.

That tonal shift aside, Rivals is the complete package, and while we’re not exactly short of choice for racing games this Christmas with a Gran Turismo and Forza also competing for the motorhead’s time, I do feel like Rivals has done everything it can to make what boils down to an arcade racer feel essential.

Ashes Cricket 2013 canned. Excuse me while I go cry in a corner