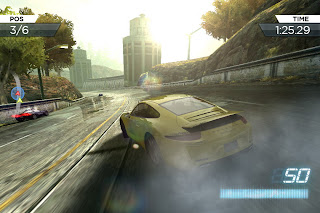 It was so very tempting to simply state “this Need for Speed game kicks off with a music introduction by Muse,” and leave the entire review at that.

After all, what better way to point out that the Gods of cool racing, Criterion, still have that sense of style and X-Factor that puts them leagues above, well, everyone else? But, since a one-sentence review together with the score this game is getting would immediately make people thing that I’ve had my integrity compromised or something similarly silly, here goes a very long diatribe about why I love this game.

To start with, yes, it’s impossibly cool. From the perfectly abstracted engine noises, to the glistening road, silky-smooth arcade controls and a breathtaking soundtrack, Need for Speed has more style than Miranda Kerr (now to search the Internet for a picture of Miranda and a car just so I can get another picture of her on the website). Despite lacking some of the sensation of speed of Forza Horizon, the scenery whips by beautifully and thankfully this world is far more interesting to explore and is filled with interesting things to smash through and more cars to find.

The latter is an important couple of words to take notice of. Need for Speed largely does away with the “grind to get new cars” mechanic that artificially inflates the length of most racing games. Instead, just about every car is available from the moment you start playing. The trick is, the cars are all parked somewhere, and it’s up to you to track them down.

The irony here is that you’ll end up spending longer combing every inch of the environment to find the cool cars than you would grinding up virtual cash or points to unlock them in a regular racing game, but you’ll feel far better about it in Need for Speed Most Wanted. There’s a real joy to hitting the brakes hard because you just passed a Maserati, and holy crap you want to drive it. Because it’s a Maserati, see.

Each car has a different set of races to play though, so to finish this game you’ll want to master every car – another nice way to encourage people to do more than just upgrade to the fastest car they can afford. These missions range from incredibly easy to headache-inducing difficult. The latter tends to happen when police get involved. 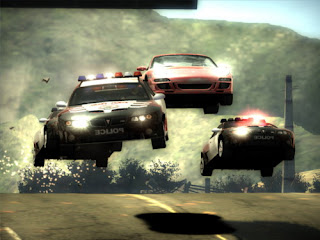 Need for Speed Most Wanted’s police are more committed to enforcing law than the real police. Using a very familiar alert grading system, Police will chase you down the moment they spot you doing something naughty. And in this game, that’s most of the time. Level 1 alert means one obnoxious police car will try and knock you down. Good luck outrunning the city’s entire police force at the highest alert level. If I’m being brutally honest, the higher alert levels are painfully challenging to escape from, and I found myself just giving in and being arrested more often than not, but the thrill of the chase is guaranteed to pull at the “you can’t beat me, you b*tards” reactions that many others will have once that siren sound kicks in.

There are some big rewards from getting away from those big chases, too. Almost any action you complete in this game (including escaping from police) earns ‘wanted’ points. These points go directly towards a leaderboard of both real (human) opponents drawn from your friends list, and virtual AI opponents – the story goal of the game is to beat each of these and become the most wanted street racer in town.

These ‘wanted’ points are updated in real time, and seamlessly runs in the background without requiring any input from the player. Criterion has experimented with living, breathing racing worlds in the past, of course, but where Burnout Paradise was a little forced for its own good, Need for Speed nails the social interaction perfectly. It’s persistent and competitive, but it’s also left in the background just enough that if you want to ignore it, you can.

All these words of course just boil down to what I said at the start: Need for Speed Most Wanted is cool. It’s slick, hugely entertaining, and yes, Criterion still knows how to make crashes simultaneously painful to watch and a feast for the eyes.

If you like racing games, you should already have this.

Retro City Rampage just got even better (than it already was)