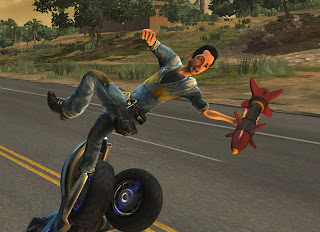 Almost every video game tries to suck you in with at least one really catchy hook. Some use an interesting story filled with deep, multifaceted characters. Other titles have a gameplay mechanic that really stands out, such as a levelling system or exciting set of combos you can pull off. Others provide deep, customisable multiplayer. LocoCycle by Twisted Pixel Games really does not do any of the above, but I still found it to be fun.

Cut scenes were presented with actual actors and movie footage, which my oldest in particular found entertaining. The characters are silly, and there is a lot of different humour being thrown at the wall here. Not all of it sticks, but enough of it does to make the game silly if lowbrow amusement.

The storyline follows a sentient motorcycle that is considered state-of-the-art weaponry to be sold to the highest bidder. The motorcycle is struck by lightning and a variety of system malfunctions and safety feature overrides occur that prompt this particular cycle to seek ‘freedom’ at a rally a long ways from home. The motorcycle manages to somehow hook its mechanic Pablo by the ankle and drags him along for the adventure. 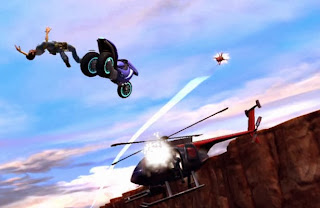 Your motorcycle, I.R.I.S., has a variety of attacks available to her, which is handy since you will spend as much time fighting enemies as actually racing down the road. It is an interesting formula that hearkens back to older combat racing games like Road Rash, but does not handle the two elements nearly so seamlessly. Here when you are fighting, that is all you are worried about. You can string together melee attacks with I.R.I.S. that are quick but weak, or use Pablo as a weapon who does more damage but swings more slowly. During these segments racing navigation is just sort of ‘handled’ by the system.

The racing segments allow you to use a machine gun as well, and essentially functions as you would expect. You try to steer around traffic and other obstacles while swerving left and right and using turbo when appropriate. None of it is erribly deep or mentally taxing, but it does make for quick bursts of fun.

The graphics hardly test the Xbox One hardware, but the environments are brightly coloured and the framerate maintains a nice, steady pace throughout. The voice acting carries over from the cheesy cutscenes and the music while not terribly memorable does not offend the ears either. There is really nothing here taking advantage of the the next/new generation of hardware. 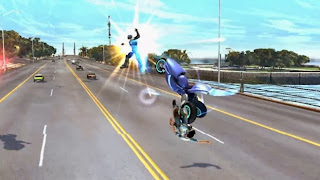 At fairly regular intervals you are graded on your performance, taking into account combat accuracy and enemies killed. It really does not impact the story line in any way, but if you are someone who enjoys doing better each time, it might provide you a reason to replay LocoCycle. The game itself is not terribly long, but given the slight repetitious nature of the gameplay, that is probably more a blessing than a curse.

LocoCycle is fun, but dumb fun. You can leave your thinking cap off and enjoy the basic combat, just do not go into LocoCycle expecting a terribly deep experience. The humour will not be for everyone, but the cheese had me chuckling more often than not along the way.