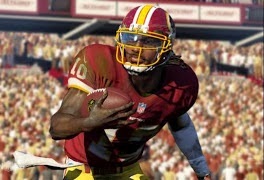 The Madden football series has a very long history, something that EA celebrated with the title of this year’s release as well as in many of the game’s loading screens. I enjoyed Madden 25 when it came out on the PlayStation 3 earlier this year. It proved to be a very good game of football that continued to take steps in the right direction. Small steps, sometimes, but they felt like forward progress all the same.

I admit to having been somewhat nervous about this next generation release. I remember the first Madden release on the Xbox 360 and PlayStation 3, and it was a rough affair. Many of the features we had come to expect from the PlayStation 2 and Xbox versions were stripped out, leaving the series as something of an empty husk of itself.

EA has been reassuring gamers for some time now that Madden 25 would be different, and that lessons were learned from last generation. It promised that this launch was going to be handled with considerable care, and the end result does a good job of delivering on these expectations. 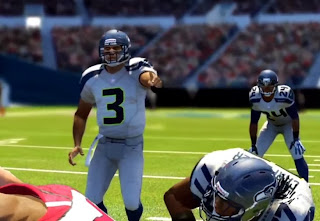 First, the easy thing to talk about: the visuals. Everything from lighting effects, reflections off of helmets and visors, character animations and even the blades of grass on the field have been discussed by EA leading up to this release. Madden was already a pretty game on the last generation of consoles, and that theme certainly continues on the PlayStation 4. Madden immediately benefits from the extra effort put into the Infinity Engine that was introduced in last year’s game. Tackle animations are generally convincing, and some of the hits are absolutely spectacular.

And yes, the blades of grass look nice too. Truth be told, my first game was Lions vs. Bears at Soldier Field, and the ground looked like it had just been re-sodded, with patches of grass that actually looked quite detailed. The crowd is better animated and sideline characters certainly look less like cardboard cut outs than they have in the past. It is a good start, but the frequent cuts to the sidelines and lack of of physical interaction (you can still hologram through sideline characters instead of making actual contact) leaves a bit to be desired.

Thankfully, unlike Madden’s initial release on Xbox 360 and PlayStation 3, this version comes with all of the features you would expect. This year EA brought back the owner mode, which is very similar to coaching in Franchise Mode – but with more micromanagement. Want to charge more for burgers and foam fingers? Feel free. Is your stadium getting pretty long in the tooth? Rumour has it Los Angeles wants you to move out their way to build a new one.

Franchise Mode is inevitably where I spend the majority of my time. I have a buddy who picked this up on release as well, and we created a franchise together. We did plenty of wheeling and dealing until we had our franchises where we wanted them and started to play our games. Week by week you can practice, progress your players, check in with your staff and compete for the adoration of fans with an ultimate goal of winning the Super Bowl. Then you advance to the next season, drafting and signing free agents to go at it once again. It is an addicting formula that is more fun with a friend.

I touched on the updated Infinity Engine, and it is far superior to what we had in last year’s Madden. Players block and hit one another more realistically. The ball had a life of its own on the PlayStation 3, sometimes rolling across the ground after a punt or a pass when it really should be at a standstill. I did not notice that on the PlayStation 4, which seemed to handle character animations and ball physics more convincingly. They are not perfect, but the experience when tied to the improved visuals do an excellent job of replicating the actual sport’s action.

The commentary still needs to be improved. This is not a new issue, but one that has been lingering for a time now. I heard a handful of new comments while playing – but I also heard quite a few lines that were not only recycled from this year’s PlayStation 3 title, but the prior year’s version of Madden as well. It does not sound like a big deal, but after hearing Simms talk about how the other team’s quarterback “shouldn’t try to be a hero, because when you try to be a hero” up to three times a game. 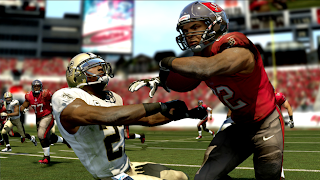 I have played a lot of Madden 25 on the PlayStation 3. On all-pro difficulty I can hang up more than sixty points on a regular basis. I have precision passing routes and can run the ball for an average of ten yards a carry. I really do need to play on Madden difficulty to make things a challenge. There is a distinctly different feeling to the PlayStation 4 iteration that is difficult for me to put a finger on. It seems like momentum plays a bigger part in player movement. Cutting is harder, especially with bulkier backs, and if you are sprinting ahead it can be much harder to shit direction on this version than the PlayStation 3 one. Mobile quarterbacks running option offences are still effective here, but not quite as effective as on the earlier iterations of Madden 25. None of this is a bad thing, but it may take some getting used to if you have been playing the earlier versions of Madden 25 as I have been.

One of my biggest complaints about Madden 25 on the PlayStation 3 was that the game often felt like it was labouring to keep up, especially in the menus. Whether I was working through a pause menu or taking care of weekly activities for my franchise, the menus had a very noticeable hitch to them. I did not notice any of that here. I was anticipating the improved processing power to show up in the graphics, but I was pleasantly surprised to see it in something as easily forgotten as menu performance.

There are other modes beyond Franchise to help you spend your time. Madden Ultimate Team serves as  a sort of card collecting/fantasy football hybrid that lives in the cloud. You can also play exhibition games, edit offensive or defensive playbooks and join online matches. If you enjoy the formula Madden presents and cannot get enough NFL action, there is plenty here to keep you playing.

This is a very promising first step forward for the Madden franchise on this new generation of gaming consoles. EA has their work cut out for them, however. Last generation took a few years for the series to really feel like it was as good or better than versions found on prior console generations. Here you have a game that is actually better than the PlayStation 3 version. It is a solid foundation for EA to build off of, but expectations are only going to be higher going forward.