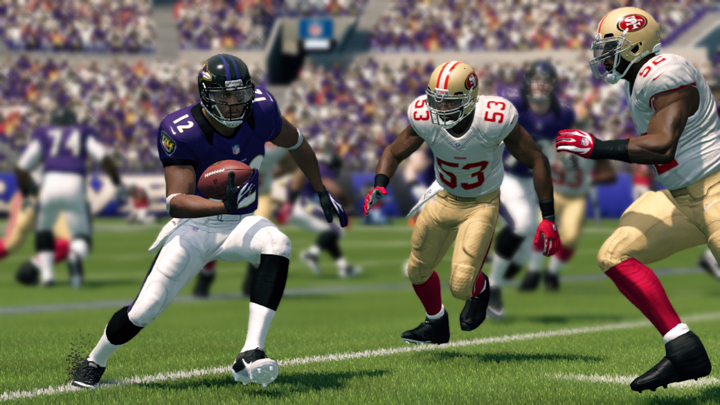 Most sports titles have year releases, and perhaps none are as well-known or divisive as the Madden series of NFL titles. This year Madden celebrates 25 years of delivering virtual football to the masses, and with that kind of anniversary you are looking at a lot of expectations – and while some were met, others felt as though they fell just a bit flat.

This is the review of the full console game – I played it on PlayStation 3. If you are curious about the iPad version, you can check out Matt’s review here.

I have a long history with this franchise, having played the majority of them over the years. I figure it is worth getting that out of the way because I feel it is safe to say that I am the target audience for this gaming franchise, and I shared some memories on the Madden series here if you are curious about them and how that may affect my opinion of the series overall.

I am usually the first to argue that Madden is more than a series of roster updates and tweaks, but this year I was a little disappointed because there were a lot of moments where fine tuning could be found, but not real large leaps forward. Maybe this is because the current generation of consoles is on its last legs, or perhaps the division of resources (as they prepare a version of Madden for the PlayStation 4 and Xbox One) kept the team from taking more chances.

There was a lot that went right in this release as well, but for all of the fanfare EA created around this 25 year anniversary, it feels like there were some missed opportunities. Really about the only throwback you see to prior games of Madden come on the loading screens, which provide some screenshots and interesting tidbits about the Madden titles of the past. It is amusing to see some pixelated football players and fun facts tossed up there, but it just seems like there should have been more. In truth, the additions mostly made this year are throwbacks to prior years of Madden – in that features that have been missing for quite some time finally made their way back into the franchise. 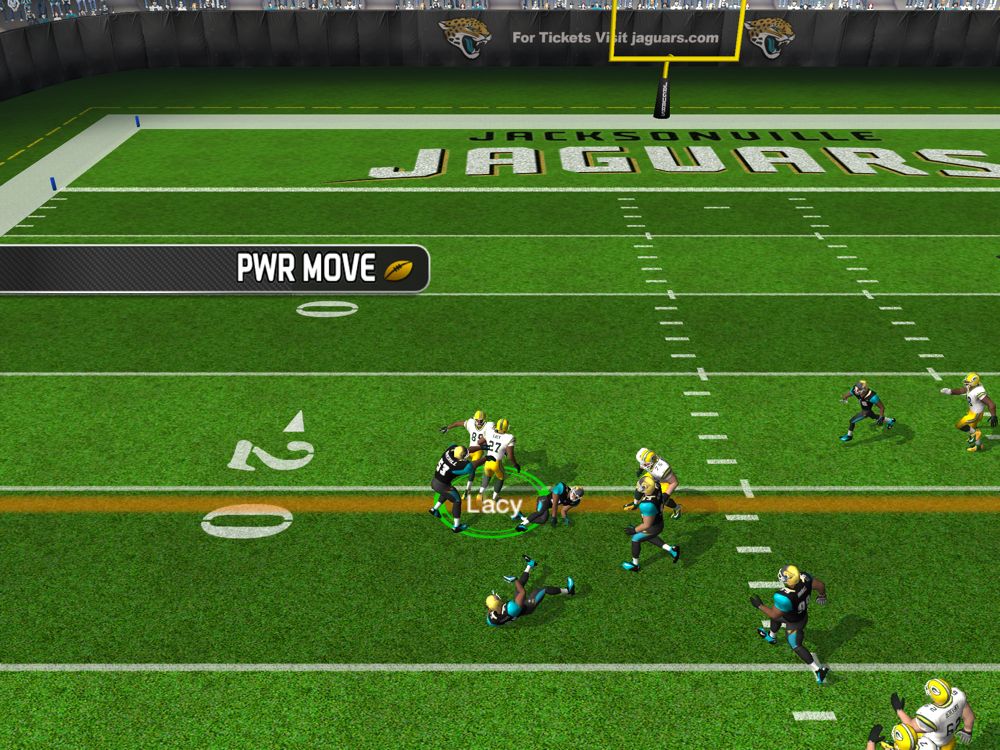 A bit of history, but when EA first brought Madden to the Xbox 360 and PlayStation 3, it did a really, really poor job of it. Most of the modes we found on the PlayStation 2 were missing, the audio was strangely vacant-sounding and the controls were all kinds of sloppy. Those first couple of years brought some substantial growing pains with them. One of my buddies joked that this year’s Madden finally gives us back some of the features we were used to on the PlayStation 2, such as Owner Mode, positional editing and the ability to bring your playbooks into the franchise modes. He then corrected himself and remarked that we are still lacking the custom play design we had during the final days of the PlayStation 2.

So while features like that, as well as the re-introduction of a fantasy draft (from day one) and local multiplayer franchise are welcome sights again, it sort of feels like they were well overdue to be included since they had been part of the franchise before.

The Madden Ultimate Team is also a somewhat dicey subject for some people. The idea behind it is actually pretty fun, where you open up packs of cards and build a team out of those players. As someone who thoroughly enjoys trading card games and has himself collected sports cards since he was a kid, this kind of mode does immediately appeal to me. That being said, there is a good deal of ‘grinding’ involved, unless you want to drop more money into EA’s micro-transaction system so you can purchase more packs of cards. You do not have to do this of course – you can simply play games and earn coins that way, but it takes a lot of games to build up coins and your teams start dramatically over-matched in the early games. Taking the best players from every position available to me, I was still only a 68 overall, while other teams were regularly and 80+ rating. Having your offensive line getting blown up every play while your noodle-armed QB loft high arcing passes at receivers moving at half the speed of the DB’s covering them can be an exercise in frustration, and unfortunately makes the Madden Ultimate Team mode feel like a bit of a money grab after you have already plunked down sixty dollars on the game.

Now that those things are out of the way, I do want to talk about a lot of the good Madden 25 brings to the table as well. The presentation is excellent, as usual. Perhaps feeling a bit recycled – especially in the audio portions – but this series still does an excellent job of making it feel like Sunday afternoon football whenever you fire up a contest. Your mileage with the commentators may vary, depending on what you think of Phil Simms and Jim Nantz, but I have certainly heard much worse.

The owner mode is a nice inclusion (re-introduction?) to the franchise, as it gives you even greater control over the state of your team. Now you can manage things like how you address the media, the type of staff you put together and whether or not you want your team to stay in their current city or relocate to another one. Sure, setting the prices on your hot dogs may feel just a bit too micro-manage-y (I am going to pretend that is a word) for some people, but I did enjoy the attention to detail overall. 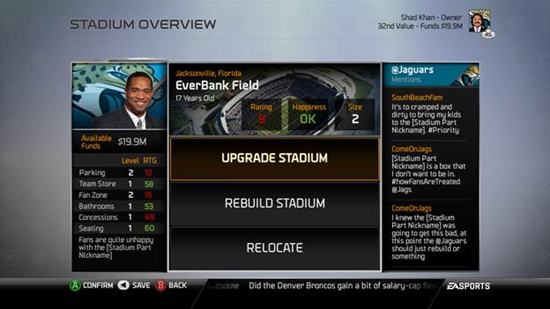 I really do wish I could create actual custom plays and formations – I spent a lot of time doing that back on the PlayStation 2, but I suppose with such a heavy emphasis on online play, perhaps there are balance concerns or technical issues with bringing that mechanic back to the Madden franchise. That being said, the ability to customize my playbook and weigh what plays get used by Gameflow was actually quite a bit of fun. I tend to use mobile quarterbacks and power running backs, while my buddy I share an online franchise with focuses on pocket passers and speed backs. This allows us to both tweak our playbooks to better match our styles of play, and the editor is pretty easy to use once you familiarize yourself with it.

As a fan of the NCAA football series, I am also happy to see that I can import my NCAA rosters into Madden once more. It might be nice to see Madden one day generate Draft Stories for those rosters – right now those only occur if you use the preset Madden draft classes, but it is nice to have the option all the same. The ability to share your files with other Madden users (rosters, playbooks and highlights) is a nice touch as well. The video at the bottom of this review is made up of four highlights from my various games that I uploaded to the EA servers and then put together into a quick compilation.

The biggest innovation in last year’s Madden 13 was the introduction of the Infinity Engine, which was an attempt to create more realistic gameplay as actual physics played a part in things like tackles, catches and run moves as opposed to over two decades of canned animations. It certainly did not work flawlessly – there were a variety of odd animations including some weird post-play stumbles and trips among the players. The running game also suffered a bit because of how easy it was to run into the backs of your offensive linemen.

A reworked versino of the engine, referred to now as Infinity Engine 2.0 is shown off in Madden 25, and it looks and plays considerably better. Sometimes, it almost feels like it is too much better – at least from an offensive standpoint. It is very easy to run the ball – I almost never lose yards, for example. The passing game feels a little bit more loose than last season, with less precise routes and balls that seem to lack the zip I had on my bullet passes last year, but it still feels like my defense is really struggling to keep up most of the time.

While the players and their animations look excellent for the most part, the stadiums still suffer from the same mostly-static views with fans who have a very cardboard cutout feel to them. It is not a deal breaker, but it would be nice to see this area touched up a bit on the next generation. Speaking of next generation, I am hoping the series benefits from increased processing power as well. The menus and end-of-week simulations feel a bit sluggish at times and hopefully can be improved upon down the road.

In the end, this is still the best game of football out there, with improvements over last year’s formula. That being said, I cannot help but be just a bit disappointed that on the 25th anniversary of the series and being the last release before the next generation of consoles, that we did not see just a bit more out of the series. If you enjoy all things NFL and Madden as I do, it is still worth picking up, but if you are of the camp that insists Madden is never anything more than roster and tweak updates, this release probably will not do much to convince you otherwise.