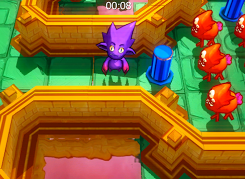 Ever since wandering the caves of Pokémon Red and Blue I’ve had a fascination with solving puzzles by navigating an avatar across grid-like spaces. Basic as the puzzles may have been, just sliding on ice and pushing boulders about made my younger self giddy. Though several games preceding and succeeding Pokémon utilised similar mechanics (namely Chip’s Challenge, an old Atari game on which this one is loosely based), the developers of Chuck’s Challenge wisely chose to revive a formula far more varied and exciting than another uninspired “match three” affair.

So while not entirely inventive decades after the original concept came to be, Chuck’s Challenge had me feeling nostalgic while still remaining firmly in the present with its own quirks.

Most of that can be attributed to level designs that manage to be ridiculously elaborate while still enjoyable to navigate. Virtually every action can be performed by simply tapping a directional button, be it moving your protagonist, activating switches, or shoving blocks. Later levels might have you playing with the camera to get a better grasp of your surroundings or rewinding individual moves to reduce the monotony inherent in prolonged puzzles, but all of it operates smoothly and with noteworthy swiftness.

The ease of control also makes Chuck’s Challenge rather deceptive. Unlike many other titles in the genre, the sheer volume of items, obstacles, environments, and enemies means that a certain novelty is present in each stage. Rather than rely on more taxing iterations of established concepts, you’re continually seeing new elements introduced. Everything from conveyor belts to directional gates and mirrors show up in just the initial batch of levels. Impressively, gimmickry is kept to a minimum even in the more thematic ones. Stages are carefully crafted to take advantage of multiple concepts, though they certainly become progressively more convoluted. 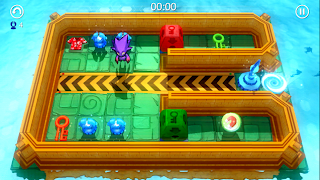 In a sense, the increasing complexity also makes Chuck’s Challenge more enjoyable as a linear experience. Though there’s the option to skip ahead to a limited selection of harder stages, the player is gradually introduced to new ideas and manoeuvres when playing in order so the game’s flow is vastly improved. I managed to tackle several levels out of order, meaning it is possible to experiment, but certain ones would be soul-destroying without having played prior levels. The only real issue that is how ridiculously easy the first batches of stages are.
Given that much of the ingenuity in Chuck’s Challenge relies on variety, the ability to craft your own levels becomes less of a bullet point but a genuine game-seller. Granted, it’s also something you’ll want to attempt after a decent time sink in the single player mode to get a feel for how everything works and what good puzzles look like. Thankfully, the level creator works well when you get around to it. I’m not typically interested in developing my own puzzles, but I did find the creative process to be intuitive enough that I found myself tinkering quite a bit.
Beyond the wide scope of puzzle-related features, perhaps the most distinctive aspect of Chuck’s Challenge is its use of timing to solve puzzles. Regrettably, I’d also have to say this is the weakest portion of the game. Whereas block puzzles and the like allow time for contemplation, the levels that rely on timing tend to favour trial and error in a clumsier manner. It also feels somewhat out of place as the type of enemy dodging here often strikes me as being more appropriate in an action game. At least these are hardly the focus of the game and the occasion timing-reliant puzzle becomes more palatable as a result. 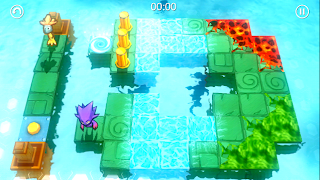 Between the number of single player stages, the level creator, and downloadable levels, Chuck’s Challenge should last you some time. There are also rewards for finishing levels within certain parameters, but like most puzzlers I would argue that repeating a predetermined solution until your muscle memory achieves the fastest time doesn’t exactly make for an engaging challenge or worthwhile replay value.
Chuck’s Challenge functions adequately as both a time waster and a basic creative outlet. Would-be notable details like character designs and the soundtrack were lost on me, but I suspect this is the last game where you’ll find yourself concerned about such anyway. As far as puzzle games go, Chuck has genuine ambition and far more depth than its mechanics initially let on.