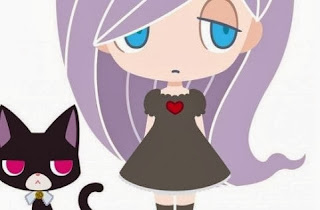 The 3DS doesn’t necessarily have that many rhythm games, but those that it does have tend to be of an obscenely high quality. From Theatrhythm Final Fantasy, to Rhythm Thief and HarmoKnight, if you’re a fan of tapping along with the music then you’re well serviced by Nintendo’s little console that could.

The sheer quality of the competition makes it very difficult for other rhythm games to get a look-in, especially when you’re talking about a genre where the gameplay fundamentals don’t really change that much from one title to the next. Gabrielle’s Ghostly Groove does give it its best shot, to be fair, but it it’s fighting a losing battle if it hopes to ever be a memorable 3DS release.

The game’s surprisingly plot heavy, with the ratio of narrative to actual play being weighted towards the narrative. Quite heavily at times. It’s a narrative that is aimed firmly at a younger crowd (and specifically a younger female crowd, I’d suggest), and so as an older, male, player I found myself doing a lot of tapping without being engaged in what was going on. I don’t have any kids of my own, so I couldn’t check on how well this narrative would go down with a younger generation (not that I would ever let my child touch my 3DS…), but I suspect that the extensive dress-up options for the main character, the big headed cute character design and the general silliness about everything will be quite attractive to the younger ones. 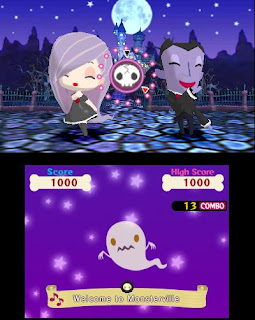 Once you finally get into a music section, it’s the standard mix of taps and swipes in time with the music. The difficulty curve is very gentle in keeping with the target demographics, and individual tracks are not so long that getting a perfect rating will seem impossible to them.

This, again, won’t necessarily appeal to the older folks out there, but for youngsters, the accessibility of Gabrielle’s Ghostly Groove means it’s a safer buy than a game like Theatrhythm. What is harder to reconcile however is the music itself.

Music is for obvious reasons absolutely critical to the experience of a rhythm game. It needs to have high fidelity and the tracklist needs to be appropriate for the target audience. The Ghostly Groove fails on both counts. The tracklist is thin, and I don’t think the younger audience will even recognise the most “famous” of the songs on it, which tend to be more about classical music than anything currently popular. I also found that, even with the best quality headphones I had, the sound quality was really scraping the bottom of what’s considered acceptable in a modern game.

The music that is there is catchy and charming enough and does fit with the game’s ‘cute ghouls’ vibe, but it’s not the kind of music that I would have thought a young girl would want to listen to when she isn’t playing the game.

But then I’m making assumptions here, I could be wrong. What I do know is that the game is very playable for younger gamers, and come Christmas time if there’s a 10 year old girl in the family with a 3DS and a eShop gift card, this is a fairly safe choice for them.

– Matt S.
Editor-in-Chief
Find me on Twitter: @digitallydownld
And also on MiiVerse: WaltzIT