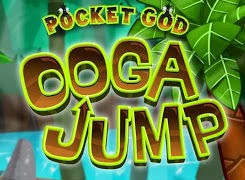 Jumping right out of its sandbox, Ooga Jump takes the Pocket God franchise to new heights; literally. Developer Bolt Creative has taken advantage of what the mobile phones are best at doing to give players a new way to experience its popular franchise. While you’ve seen everything this game offers elsewhere before, there’s a lot of enjoyment to be found all the same.

The game is a standard auto-jumper, where you’ll tilt your device to keep the avatar landing on platforms in the hopes of climbing as high as possible. It’s the style that’s found here that makes it so charming. Vibrant tunes and colourful visuals do a fantastic job of keeping the challenging gameplay free of frustration while the game’s avatar, the Pygmy, bounces and flips around gleefully as he traverses the treacherous platforms; it’s apparent that he thinks he’s the ‘god’ of more than just pockets, for sure. 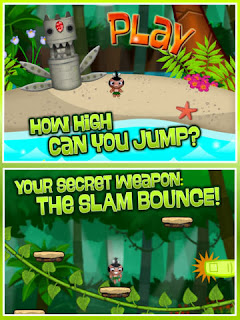 While the now typical sets of challenges and boosts that we find in mobile games are present and accounted for, this Pygmy has a trick up his sleeve: the slam bounce. This move only requires a single touch of the screen and it finds the little guy hurling himself downwards with quite the bit of force. Connecting these bounces with a platform will propel him much higher than his typical leaps. This bounce manoeuvre is used for a number of things, such as breaking signs for gems and points and evading some of the monsters that randomly make their appearance to try and thwart your upward progress.

Its Game Center tie in finds your friends’ top climbs visible as you bounce to new heights to provide the standard online leaderboard experience to inject the game with some added replay value. Regardless of how you good you are at the game, though, Ooga Jump is another solid entry in the endless jumping genre. Even if it does not necessarily do anything revolutionary, it complements the core franchise very well and that’s a sure fire way to keep Pocket God fans happy for a good while longer.

-Chris I
Editor-at-Large
Find me at Twitter: @Slapshot82
Find me at Game Center:Slapshot82

Call Of Duty: Ghosts represents everything that is wrong in the games industry