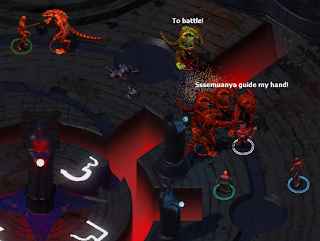 Not that much has been done to this re-release of Baldur’s Gate 2. But then not much needed to be done; it’s as close to the perfect game as games come.

Now on a personal level I prefer BioWare’s first Baldur’s Gate game. Back when I was a youngster and still had the time to play the “real” Dungeons & Dragons game with friends and beers (only once we were 18, naturally…), Baldur’s Gate represented the first time that a game developer had genuinely recreated the tabletop RPG experience in a video game. With Baldur’s Gate, seemingly small choices would have massive ramifications later on, and players were largely free to explore the world at their own pace. There were all kinds of dungeons filled with danger and loot that were entirely optional, and as a consequence it felt like the decisions that I was making to delve into said dungeons were real and tangible. It wasn’t just the dungeons, either; the social decisions and conversations that would paint my hero as either saintly do-gooder of dastardly villain were my own. To this day I remember feeling rather conflicted over killing Noober.
Actually, that’s a lie. Noober deserved to die. 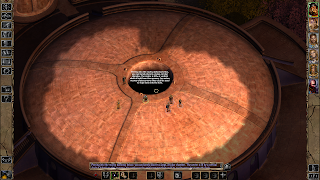 Looking past the nostalgia though, Baldur’s Gate 2 is, objectively, the better game. Picking up right were the first game left off, the sequel featured many familiar faces (and some new ones), but bigger and more interesting environments and deeper and more deadly dungeons. Minsc and Boo powered up, basically, and that lead to far more interesting and tactical combats. There were more options, and the enemies had more interesting skillsets of their own. The pitched battles with the game’s regular “boss” battles were especially memorable, and far more engaging than the relatively simple slogathons that we were subjected to in the first Baldur’s Gate. By the end of Baldur’s Gate 2 the party of heroes are truly powerful and capable of singlehandely changing the direction of the world, and the concluding battle is satisfyingly epic.
Additional powers aside the adventure plays much as it did the first time. BioWare’s love of throwing difficult moral decisions at players has arguably never been better than in Baldur’s Gate 2. Knights of The Old Republic was hamstrung a little by being a Star Wars game, and Mass Effect’s love of linear shooter levels left the moral decisions feeling divorced from the structure of each game, but in Baldur’s Gate 2 is was a very real and very organic process. There were times where the decisions you would make wouldn’t have ramifications until well down the track, making it unwieldy to load an old save file and make a different decision, and so players were encouraged to think before clicking a dialogue response. Imagine that, thinking before talking! It’s a positively quaint idea in world of modern games. 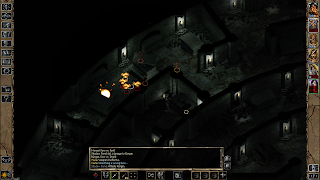 The choices that players make impact on the type of characters they attract, and playing an evil character will result in a very different party to playing a righteous hero. Regardless of what party you wind up with, however, they will be a bunch of truly memorable people. From the certifiably (but lovable) insane, to the romantic, to the psychopaths that make Final Fantasy VI’s Kafka look like a bunny, Baldur’s Gate 2 is nearly endlessly replayable because each combination of characters yields a fundamentally different gameplay experience.

Over the years it’s been depressing to watch what has happened to the RPG genre. Once a beacon for player agency, RPGs have become increasingly linear and even when they supposedly allow players free choice, it’s smokes and mirrors. People write endlessly about how open Skyrim is, but the main narrative will remain exactly the same regardless of what you do in your downtime, and the game’s dungeons are “follow the single path to the boss” affairs. Mass Effect is a stock standard shooter with the occasional cut scene giving players a “yes or no” alternative. Even the Witcher is a largely linear affair. 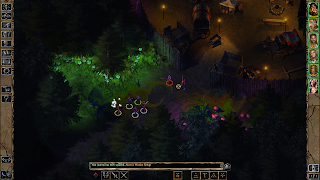 I exaggerate slightly, and those games are all very fine indeed, but Baldur’s Gate and its sequel were truly open world before open world was cool. And they were a kind of interactive open world people didn’t just stand around for the sake of it – even the minor characters and cityfolk had a reason to exist.

In terms of additions to this edition, there’s a couple of new characters, each with their own backstories and quests. It’s impressive how neatly these characters integrate into the overall narrative – if I didn’t know that these weren’t original characters I would have never have guessed. It might not seem like a big addition and considering there are already so many different characters to party up with perhaps it’s not much of a reason to repurchase the game, but by the same token I appreciated that there was something different to jump into after having replayed the original game so very many times.
Otherwise it looks, sounds, and feels much the same way as the original release of Baldur’s Gate 2. There’s some slight enhancements to the visual engine (such as recognising that most people play in widescreen now), and the interface has been slightly cleaned up, but the in-game sprites are the same and the environments are a direct copy/ paste. This means they look very primitive, as you’d expect for a game first released 13 years ago. Primitive, but not necessarily bad; BioWare has always understood the aesthetics of epic adventures. 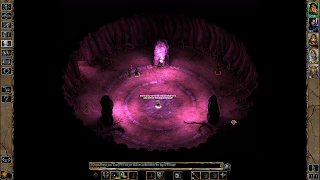 And that, ultimately, is why Baldur’s Gate 2 deserved to be played again. At a time where games – even RPGs – are becoming increasingly linear and focused on action, Baldur’s Gate 2 remains an epic, strategic, and non-linear experience that is every bit as compelling now as it was a decade ago. I’m looking forward to the iPad release even more the idea of having both Baldur’s Gate games in such a tiny form factor has the nerd in me jumping for joy, but if you don’t have one of those devices than the PC version is every bit as good (and you don’t need to pay for each of the new characters via DLC this way – they’re all packed into the base game here).

And if you’re relatively new to gaming and haven’t had the chance to play this game yet, then jump to it. It’s as close to canon as games come.

Xbox One is live in Australia, and we have the photos to prove it