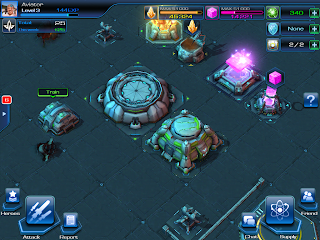 In yet another casual strategy game for tablets, Galaxy Factions tasks you with commanding an outpost that has been charged in getting rid of the pirate colonies that have illegally settled nearby. Galaxy Factions takes the basic attack and defense formula we’ve seen before, and tries to mix it up.

You first have to build a base, your home of operations. From here you mine for resources that can be used to build defensive weapons, troops to attack other bases and buildings that will help your base function. The more walls and turrets you build the harder your base will be to destroy. That being said if your base lacks offensive power, then you won’t be able to destroy enemy bases.

Once you’ve built enough troops, you get to invade bases. These invasions sees you destroying buildings to collect the minerals that you need to grow more troops and build more structures. When you are attacking a base, you can place the units you created before deployment anywhere on the map, as long as it isn’t next to any of the buildings your enemy has placed. With smart placement of walls landmines and turrets, enemy units can be filtered into a tight bottleneck, making it very difficult for them to attack efficiently. 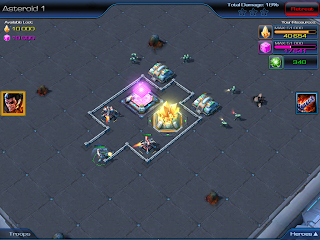 In an interesting decision, your base is carried over when you’re playing both single player and multiplayer matches. The rewards you get from both matches can be used to build your hub. It’s fun, but where this falls short is that Galaxy Factions is one of those free-to-play games where it’s easier for players to buy their way to victory. Nothing is left out of a player’s reach if they don’t want to shell out money, but the game does run in real time and you’re often going to feel like you can’t wait for hours to complete upgrades and so you’re going to feel the need to pay for them.

As you progress through the singleplayer aspect of the game, you begin to unlock heroes that can aid your base raids. They vary from offensive to defensive and can be what saves you if you come unprepared. Each hero has their own time limit in terms of how often you can use them and once that’s up you have to pay to use them again.

It’s surprising to see the quality of the presentation of iOS games recently. There are a few parts that are misplaced in the game, such as your female guide forgetting to wear an appropriate space suit, but it’s the graphics that makes it both easy to enjoy playing it for a few minutes at a time, and is part of that incentive to pick it up again.

If there are any readers who don’t have immediate access to a Wi-Fi network, once Galaxy Factions downloads, there’s another hefty in-app download that is required to play the game. On top of that, if your device has no network connection, you can’t play the game at all until you find one. The network issues aside, I was pleasantly surprised by how much I enjoyed this. It doesn’t throw too much at you at the start so and you’re more inclined to return to it. I’m not sure how well this would on smaller screens, as some precise placements are required for the ideal strategy, but if you’re looking for a free strategy game to eat away at a few minutes at a time, Galaxy Factions is for you.