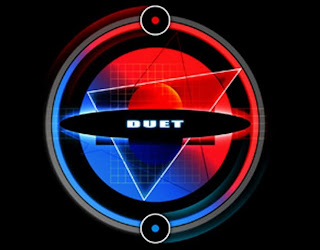 Duet is a difficult little game which requires copious amounts of intuition, reflexes, reaction time and spatial thinking. It’s also not a game about any of those things. Despite the developer’s penchant for creating fluid and original levels springing from a simple gameplay mechanic, Duet’s artistry lies elsewhere.

The central gameplay offers many similarities to other manic action puzzle games available on the App Store such as Super Hexagon. Indeed, Duet initially bills itself as a “hex-like”. The player controls two spheres set to rotate at opposite sides of a circle, and must guide both through a passage of menacing white rectangles. The simplicity of the controls hides a certain craftiness in the game’s difficulty – having to protect two spheres at once is where much of the challenge lies.

There are a total of fifty levels divided across stages, each one named after a stage in the Kubler-Ross model of coping with grief, and there’s a real subtle brilliance in this theming. Each stage is marked by a distinct block behaviour – for example, denial manifests as rotating blocks while anger takes the form of sudden, faster obstacles. Each stage offers its gimmick plainly at first, to allow players to become accustomed to the mechanic before mixing it up to deliver a hefty challenge. 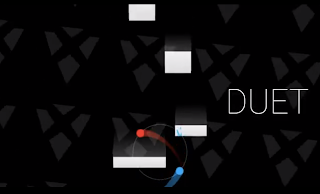 For players who like a lot of content in their game, Duet doesn’t disappoint either as each level can be perfected by completing it with the minimal amount of required taps. The unlockable endless mode also provides another way to enjoy the game, featuring a rather ingenious regenerating-heart system to stop the experience from being too stressful.

It needs to be mentioned that Duet will seem from promo screens to be a very difficult game. The difference between it and something like Super Hexagon for example is the way it presents its difficulty. Duet does not laugh at your failures or suggest that you give up. It doesn’t aim to infuriate you or make you toss your iPhone across the room. Duet isn’t your enemy. Instead, it’s a game which wants you to succeed.

As you visit each new level, a small message is displayed which corresponds to the emotional theme of the stage. The voice is firm yet gentle, and as players you feel that it’s trying to help you along. Seeing a phrase like “I know you can do this” before you tackle a difficult level makes it seem easy by comparison. Furthermore, each failure causes your sphere to make a paint marking where you collided with an obstacle. This colour contrasts with the otherwise pure-white gauntlet to make the more difficult segments visually striking, allowing you to subconsciously avoid them better. The levels are also somewhat rhythmic, and while the game doesn’t test your rhythm you will find that the electronic beats boost your intuition in difficult moments. 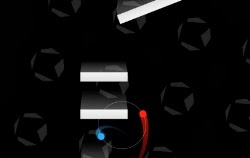 All this comes together to make playing Duet all the more satisfying. Even though you will die many times, the experience is never painful. The “just-once-more” mentality that many difficult games try to establish is executed perfectly by Duet because players feel a strong determination to succeed. In the end, Duet is a game which tests your perseverance rather than your dexterity, because the developers know that anyone can finish all the stages with enough practice.

It’s clear that Duet is something special which anyone would be able to appreciate. The combination of tough challenge and firm motivation left me to start playing and then regain awareness of the world two hours later with sore arms and no desire to stop. If you’re feeling up to it, download Duet and set aside a good three hours after a long day at work to enjoy it without distractions. This isn’t a game which will make you feel like a masochist; in fitting with the Kubler-Ross theme, it’s a game about how ordinary people can overcome extraordinary challenges with the right amount of motivation.