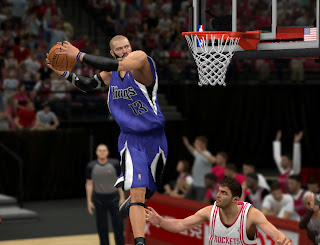 Even though I don’t know much about basketball, you can tell that a lot of effort has been put into NBA 2K14. Just spending time watching the demo play on the title screen, you can tell how much work has been put into the game’s AI. The way each player moves, attacks and defends all make it look like you’re watching an actual basketball game. Actually, compared to the Australian basketball championship, what you see in this game looks far more realistic than the real thing.

The realism comes at a cost, though. What is very clear the first time you boot up the game is how unfriendly the game seems to someone as uninitiated as I. The game loads and you’re given the option of playing a game between two teams in an interface that doesn’t do a great job of explaining what’s going on. If new players weren’t already alienated enough, there is a steep learning curve straight off the bat. There is a really good tutorial that runs through every move you can make, but unless you spend hours remembering all of the different moves that they’ve managed to cram into the single controller you won’t get very far when it comes to technique. 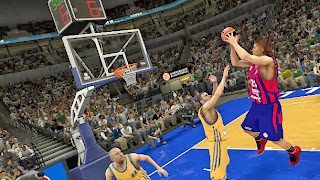 The Pro Stick control is something that is really impressive when it comes to controlling the ball and your player. By moving the right stick in various ways, you can perform fake outs, blocking as well as performing many stylish shots. It’s amazing how accurate it actually is. A lot of the control inputs require precision to execute, at times calling for quarter turns of the right stick and you’re able to pull them off without too much hassle.

Although the tutorial runs through ways of attacking and defending, you’re never given the opportunity to practice maneuvers during phases of attacks and defense. Players who know the ins and outs of basketball will know how to attack, when is the time to attack, where is the best place to shoot. For someone who isn’t as familiar with the game it’s going to mean quite a few losses at first. 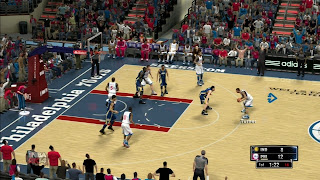 But then I wonder why someone who isn’t a fan of basketball would buy this game. There’s no arcade appeal to it at all. With that in mind I can’t think of any way in which basketball fans, specifically NBA fans, could be disappointed by the effort 2K has put into NBA 2K14. The roster that includes all current NBA teams and players as you’d expect, but goes one step further to offer a collection of teams from the 70’s and 80’s. You can change the way the game sounds choosing from being on the court, to in the stands to make it sound like you’re listening a to a game through a TV broadcast. There are so many little touches that make the game just that much more enjoyable.

One of the main drawing cards for NBA 2K14 is the man on the front of the cover, LeBron James, and his close involvement as a centerpiece of the game. Rather than a retrospective view of his journey through the sport, the story mode leads the player into the world of the hypothetical. What if he stayed with Miami Heat? What if he moved on? I’m sure the NBA fanatics would enjoy the story mode, but to me it was just another gap in my ballin’ knowledge to overcome. 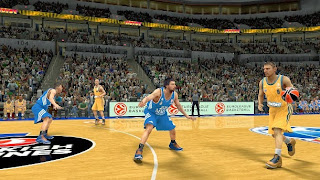 That leads me to what is most problematic about NBA 2K14; the very best sports games are easy for complete newcomers to pick up and get introduced into the sport. I think of the FIFA games which do such a good job of easing people into the game of soccer, and it’s hard to feel as enthusiastic about NBA. It’s unfriendly to gamers who haven’t played basketball games prior, and is very unfriendly to people who don’t know a lot about basketball. As I played more of the game, I was able to get a hang of the pro stick controls, but I still didn’t really understand why I was getting fouled or why fouls were being given to me.

Basketball is a complex sport, and perhaps it was 2K’s intention to make a game solely for the most hardcore of basketball fans, but I’ll be very interested to see how EA handles this if its basketball game finally gets released this year. I’m willing to be that one will be more accessible.

My mild enjoyment from NBA 2K14 can’t dismiss the fact that 2K have produced a great game. There’s so much detail that is crammed into this game, and online play is sure to players value for money until the next game is out. The running commentary that sounds genuine is a great addition to every game. To every basketball fan, I can guarantee you will find enjoyment in here somewhere. To those who aren’t involved in the real world sport, you’re going to struggle.