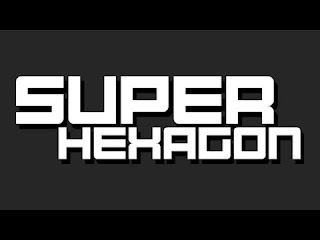 Booting up one of Terry Cavanagh’s games, you know you’re about to take a shot of nostalgic fun and take a beating from its punishing difficulty at the same time.  It’s like a trademark that seals his games together and it’s one that keeps you coming back for more over and again. With his latest release, Cavanagh spins the iOS market around with Super Hexagon and like his previous titles, the enjoyment factor here runs just as high as its punishing difficulty.
Retro to its pulsing, spinning core, Super Hexagon is nothing short of visual eye candy. Even with its simple graphical approach that is made up of six alternating coloured hexagonal panes, when put into motion, the colourful swirl sucks you into the gameplay much like the red and white swirling toys hypnotist used in the old horror flicks did; you just can’t stop looking at it. When coupled together with Chipzel’s pumping chip tunes blasting through your head, the visual effects and audio alone are enough to keep you glued to your iOS device, but the gameplay ensures it.
At the centre of the screen is a small triangle that spins around a hexagon when you touch either side of the touchscreen. As the entire screen swirls back and forth, the lighter coloured blocks that spin in towards you can’t be touched and navigating the small triangle through these deadly blocks keeps the game in motion. It’s a very minimalist gameplay style, but one that doesn’t get a chance to wear thin, because the starting difficulty will test even the most hardcore gamers skills. Yes, the very first level is unbelievably difficult and reaching the end of it requires you keeping the game in motion for a full 60 seconds. Even as a gamer that indeed falls into the “hardcore” category, it took me a good ten tries just to reach the second section of the first level, which is only10 seconds into the game. 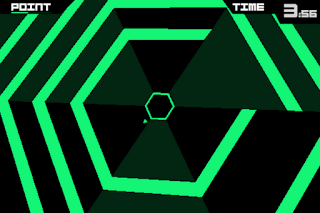 If that seems frustrating to you, know that it is – at first. First of all, restarts are near instantaneous and only need a single tap to activate. You’ll also start picking up patterns within the game, as well as getting acclimated to the game’s sensitive touch controls. Every ten seconds the female announcer will announce the next section’s pattern (e.g. Line, Triangle, etc.) and each of these has a unique style that you’ll need to master, but they randomly alternate, so you’ll never know which one you’re starting on. Within a few minutes of playing the game, those annoying 10 second runs start giving way to 30-40 seconds ones and at this point you’ll find yourself completely immersed in the entire gameplay experience. But it’s the elation felt when a stage is completed that sets Super Hexagon over the top and just has to be experienced to be understood.

Six stages are available to challenge your skills upon and while that might seem a bit lacking at first, each level moves faster and ramps the difficulty ever higher with it. At the time of writing, I still haven’t completed the third level and I’ve put a few hours into it alone. Each level comes with its own set of awesome tunes though, which makes each new challenge worth the pain; they’re just that good. Regardless of how much punishment I take from Super Hexagon, these tunes are worth doing whatever it takes to hear them all; I will persevere. 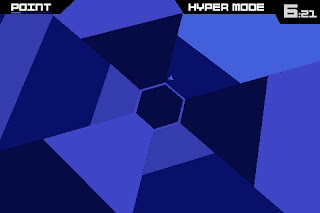 With all my time spent trapped to my iPhone playing Super Hexagon, there’s only two minor issues that I’ve come across: the before mentioned sensitive touch controls and the announcer. The controls have to be sensitive for the game to function properly  within the fast gameplay environment, but at times it seems like they’re a tad too sensitive and there’s no way to adjust them. Sometimes you only need to move the triangle a fraction to slip through a small approaching gap and a quick tap can send you past it, where you’ll be treated to a “Game Over” from the female announcer. Also, when play sessions only last three to five seconds each when learning the new levels, hearing her announce your failure in quick succession becomes repetitious and starts to become a frustrating distraction. With the game requiring your full attention and patience, this starts wearing thin on your nerves and at times can break the game’s immersion. Having the option to turn the announcer off when tackling a new level would alleviate this and is something I like to see implemented in the future.
With its minimalist gameplay approach, addictive nature and awesome techno soundtrack, Terry Cavanagh’s Super Hexagon will push your skills to the limit and keep your eyes glued to your iOS device like a psychotic hypnotists. Cavanagh literally flies a finger to all of those naysayers who deem mobile gaming as being a “casual market” and the hardcore need only apply here. Grab your headphones and let Super Hexagon suck you into its retro dimension; this one is well worth its small asking price.
– Chris I