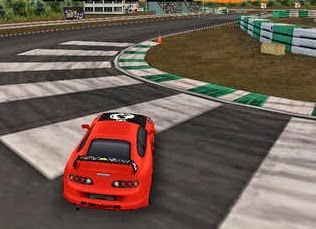 The drift scene can be a thing of beauty: powerful import tuners and muscle cars using their immense power to lock into high speed drifts, leaving waves of smoke and burnt rubber in their wake. The Drift Mania series has attempted to bring this high speed action to mobile devices and gained a substantial following in the process. Now that Real Racing 3, 2K Drive and Colin McRae Rally are on the scene, is Drift Mania: Street Outlaws still in contention or is it in a league of its own?

Street Outlaws is a game that’s focused on one primary thing: drifting. As to be expected, it has this gameplay mechanic locked down, for the most part. Using the default tilt controls, speeding down these curvy roads and locking into drift is as easy as bumping the on-screen handbrake and smoothly tilting your iPhone. It’s not something you’ll grasp on the first corner, but after a few minutes you’ll be drifting corners at speed with relative ease.

If you have any experience with the drift scene, you’ll know that racing into corners at full throttle will do nothing but put you into a concrete barrier. It’s here that I truly commend the gameplay structure in Street Outlaws. The right side of the touchscreen is where the digital throttle is found and the higher you touch/slide your finger on the screen, the more throttle that is applied. Each track features both high speed and technical section, and this control method does a great job of keeping you full control.
Where the drifts starts losing traction isn’t in the controls, but in the camera.

When you’re running at speed and locking into drifts, the cinematic camera tilts the environment for a cool visual effect. Yet, on the slower paced technical courses, the camera shifts so recklessly that it doesn’t matter how well the game controls, you can barely keep the cars on the track. Digging through the options will find that there’s no way to turn this setting off, unless you opt to use the digital steering wheel, which is practically unusable, as the developer has opted to not implement a floating analogue stick. Furthermore, if you choose to use the digital buttons for accelerating and braking, you’ll find that they are placed close together at the bottom corner of the screen and regardless if your finger covers the entire button(s), they’re frequently unresponsive. 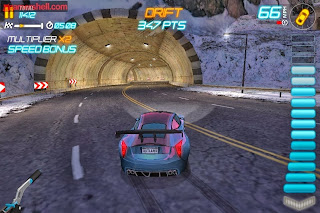 The Career Mode lets you work your way through the game’s tracks, not by achieving high scores from how well you’ve performed on the track, but by completing a set number of the track’s achievements: completion time, no damage, staying on track, etc.. There’s the standard set of medals for each track, but going for them is of little use, as there’s barely a noticeable gain monetarily from earning the higher medals. Even in the Battle Mode, where you’re racing against a CPU racer in a tiered series of races, winning the top spot barely pays you anything that’s worth your effort.

So how do you make money? Well, that’s the fun part – spamming your Twitter/Facebook accounts with your race times after each event nets you a random bonus from $100 to $10,000. With a large assortment of cars and upgrades to spend your cash on, it’s a shame that you’re so poorly rewarded for your actual time on the track; it’s yet another poorly implemented gimmick that drags down the potential of a good iOS title – the standard in-app purchases are available here as well.

Drift Mania: Street Outlaws is a sharp looking, high speed drifting title, with a solid rockin’ soundtrack packed along for the ride. The tilt controls are a perfect fit for the iPhone, making it a shame that the developer has opted to use an unrewarding social media spamming payout system that rewards you more for annoying your actual friends, than your performance on the track. Street Outlaws might be in a league of its own with its unique approach to the racing genre, but its poor monetary system keeps it away from being a top contender on the iOS Marketplace.

Hands on with Killzone Shadow Fall; Nope, this didn’t do it for me at all