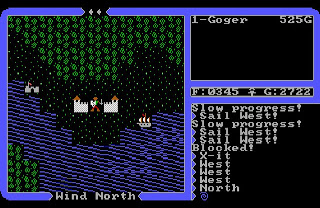 Perhaps as something of an apology to the veteran Ultima fans for Ultima Forever being a free-to-play game and annoying many fans of the classic series in the process, EA has released Ultima IV: Quest of the Avatar on the iPad for free.

Don’t worry, this one doesn’t come with microtransactions.

Ultima IV is a very (very) old game, originally released on the Commodore 64 to widespread acclaim as “the best RPG ever made.” This was, of course, before The Witcher 2 was released, but fans still have a point in raving about this game; the storytelling is unparalleled from the very moment where you build your character through a tarot reading. It’s a massive quest in all its ugly-sprite glory, and the deep, rich world is backed up by mountains of textbook-perfect RPG storytelling.

The iPad port of the game is a straight-up emulation with a replica keyboard (every command is keyboard driven) taking up half the screen, and the grainy graphics taking up the other half. A couple of icons up the top provide a handy reference for the masses of commands you’ll need to get through this game. And let’s not make the mistake of thinking this is a straightforward game because it’s so old; Ultima IV is a ridiculously complex game. So much so that EA has included both the original game manual and some guy’s GameFAQ for the game to help new players get into it.

I don’t know how good that FAQ is. I’m so awesome I didn’t need it.

But seriously, if you have an iPad and a love for classic RPG storytelling, you can’t go wrong here.

Vita TV; a painting of the future of console gaming