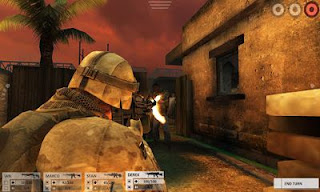 Arma Tactics achieved something that no other iPad game has done before; it burned my fingers. So hard does this poorly-optimised engine push my 3rd Generation iPad that before I knew it smoke was floating up around the device. Then I realised that that was because my fingerprints were being melted off. The fact that I’m typing this review now is proof of how much I love my readers and I have to go through the sheer pain of typing in this state to warn others before they burn down their houses or something by leaving the game on before running an errand.

I exaggerate slightly, of course. My hands haven’t melted, but the fact is that this game is so intensive on fairly beefy iPad hardware that it becomes very uncomfortable to play, just minutes after starting up a game. This isn’t a hardware malfunction – I have never encountered this kind of heat before. It’s the Arma engine. 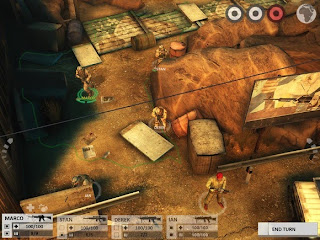 I’m not actually sure why the game is trying to melt my iPad, though. It isn’t really any more attractive than other top-down tactics games like XCOM, and those run just fine with their engines. In fact, XCOM even makes the scenery transparent when it would obstruct a player’s view of what’s going on. When Arma tries to do that the frame rate crashes to 1-2 framers per second, and that is NOT an exaggeration.

I know that the guys making Arma games love to push hardware, but I would expect said efforts to at least result in a game that’s more impressive than its far better optimised immediate competition. All Arma has going for it is big, sprawling maps.

In most ways it plays like a standard tactics game. Players have a small squad of soldiers and they run around shooting other soldiers in turn-based fashion. Levels are filled with debris and cover and vantage points, and because the enemies typically outnumber the player’s team by some distance it’s mandatory to take advantage of the terrain in order to succeed. 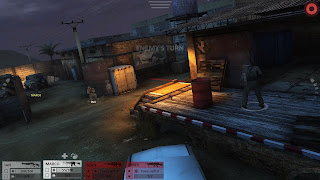 Prior to taking a shot at the enemy the game generates a little number, which nominally represents the chance for the attack to connect with the enemy and do some damage. So for instance having an advantage of height and cover results in a chance of 75 per cent (or better) to hit, while the opponent has a chance of under 20 per cent (or less) to succeed in retaliation. This is fine in theory. In practice those numbers mean next to nothing. I’m not statistician, but I do know that if I have a 75 per cent chance of landing each of the two attacks it takes to down an enemy, and said enemy has a 20 per cent chance of doing the same, the chances of that enemy actually winning and incredibly small. It happened to me on multiple occasions. Despite the enemy AI being dumb enough to pull stunts like running into open space when surrounded by my entire unit, I very frequently and quite magically came off the worse in encounters.

And because levels are so large to say I found it frustrating to find myself getting shot to bits by “unlucky” statistics right at the end is just unacceptable. Games like XCOM reward sound strategy with numbers that mean something. Arma Tactics seems happy to ignore the numbers whenever suits it.

In that context it doesn’t really matter that there’s a lot of variety in missions, and random maps that extend the life of the game even longer. It doesn’t really matter that there’s a wealth of customisation options and a levelling system that does work in making you feel more effective in combat. The basic reality is that Arma Tactics is a horribly unbalanced game and the player feels more at mercy to a malfunctioning engine than an armchair general. As a fan of strategy games, that’s a sin condemnable to the deepest levels of hell.

Between the horrible optimisation and shoddy tactical gameplay I didn’t enjoy Arma at all. Apparently the experience is better on high-end Android platforms. Good for them. I’m going back to XCOM.

Download “The Circle”, a children’s book based on the indie game Shelter