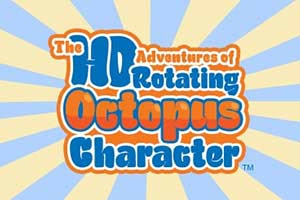 The HD Adventures of Rotating Octopus Character, a remastered version of the PS Mini title, still provides the same fun and colourful atmosphere on the Vita. Players control an orange octopus in an effort to retrieve all of its offspring scattered throughout the world. Birds, bulldogs and projectile-throwing hats are only some of the things that Rotating Octopus Character needs to avoid to stay alive.

With an HD remastering comes levels that are even more polished and colourful. The sharper, yet pixelated levels are visually appealing, consisting of various elements throughout parts of the world. Stages consist of multiple levels each showing a variation of that world. Examples consist of shrubbery and umbrellas making up the backyard levels, double-decker buses and phone boxes line the London streets, and movable structures and camels dot the Egyptian sands. Even the foes, such as police hats, snakes and bulldogs are fun to look at despite their mean demeanor. A challenge mode is also included as an alternative to the story. The objectives are still the same, yet each level is timed with bronze, silver, and gold targets as well as leaderboard rankings. It’s an obvious twist to the main gameplay, but I found myself enjoying it more than the campaign.

Rotating Octopus Character uses its tentacles to move around on surfaces such as structures, umbrellas and plants. Pressing the Square button allows the player to change the direction of movement while the X button allows the player to jump to a parallel location on the map. The controls are simple, but there will be many situations where jumps and quick direction changes will require precision. However, it’s not as frustrating as other precision-based games, thanks to a few aids. More often than not, a potential obstacle or octopus is off-screen. Thankfully, arrows appear at the edge of Rotating Octopus Character’s vision indicating an octopus or an exclamation point for an enemy. It doesn’t make the game easier, but rather serves as a heads-up to players and saves more than a few would be moments of frustration from taking place. 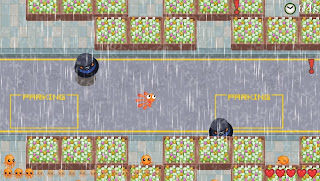 For the most part, the game provides very little difficulty, but there are moments where players might question certain aspects of the game. Gaining life by collecting various bubbles in some levels is easy, but staying alive is a challenge. Even with help from indicators, there is still a chance of losing a life. Lose it all, and you have to start the entire stage. It didn’t happen often, but when it did, it was an exhausting process that could turn players away from continued play. I didn’t notice it at first, but there is a time limit in each level. I finished most levels well within the set limit, so it doesn’t make much sense that the timer is even there at all.

The cheap asking price, and the colorful and friendly attitude of The HD Adventures of Rotating Octopus Character definitely makes it worth playing. Its simple, yet addictive mechanics can easily hook players for a good couple of hours. Despite its minor flaws, it’s something that everyone should check out.