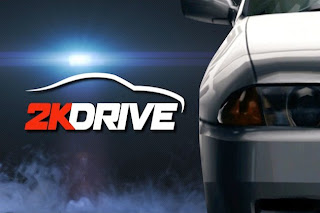 Early this year, Real Racing 3 turned the media’s attention to the racing genre on iOS devices, much like Mario Kart Wii’s plastic steering wheel peripheral did for the Wii. While Real Racing 3’s beautiful graphics and social integration kept us racing for 40+ hours here at the DDNet offices, its free-to-play model eventually found us growing frustrated and moving on to other titles. 2K Games clearly understands those frustrations and brings a more home console-styled gameplay experience with 2K Drive to our iOS devices, in the hopes of putting us right back into the driver’s seat once again.

While Real Racing 3’s focus was on a variety of street and drag races, 2K Drive doesn’t stop there: dirt tracks, salt flats and drift courses fill the event list, while mini game styled events like bowling and evading missile fire from a helicopter continually keep things interesting. Arising from the remnants of Bizarre Creations (Project Gotham Racing), Lucid Games delivers a racing style that’s somewhat similar to its past, but with a lot more suspension physics this go around – finding a nice middle ground arcade/simulation mix to the racing that keeps the action challenging and fun.

Early reporting found that 2K Drive might or might not have a free-to-play gimmick within it, which was understandably questionable with its $6.99 USD price point. You’ll be glad to know that while it does have a feature that looks like it is, it isn’t exactly what it might seem at first. As with most mobile titles, there’s a dual currency in the game: stars and coins. Stars double over as in-game XP and currency for repairs, single race boosters, upgrades and apparel, while coins are used primarily for purchasing vehicles and high level upgrades. Where Real Racing 3 had paywalls, you’ll find nothing of the sort here. Stars are doled out in abundance and repairs come cheap – free if you don’t drive the damaged vehicle for a few minutes – and daily challenges and asynchronous multiplayer events don’t require you to own the event’s vehicles, allowing you to amass coins and stars without a care in the world. Sure, you can buy a car pack for an additional $10 USD, but it isn’t necessary, as gaining the needed funds for the cars never feels like a chore like it does in Real Racing 3. 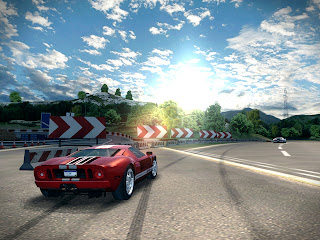 Daily and weekend events not only bring the game’s multiplayer to life, but each event packs additional awards for the Top 100 on the leaderboards, with higher places gaining the highest earnings. The top driver even gets his/her face plastered on the event’s main page for the whole world to see thanks to a neat (oftentimes hysterical) photo trick that puts your face on your in-game driver. I actually held the top spot on this past weekend’s event for a good while, but was eventually dethroned as it came to a close. If you’re like me and like to sit atop the leaderboards, these asynchronous events are a great way to keep you jumping back into the driver’s seat everyday.

The competitive nature of the title wouldn’t be the same if the game’s controls weren’t up to par, but 2K Drive delivers. Whether you’re using the tilt controls or the digital analogue setup, controlling the vehicles on the touchscreen devices becomes second nature in only a few minutes time; of course, you’ll likely want to disable the braking and steering assist if you’re looking for a competitive edge. Casual gamers might want to keep the assist on if using the tilt controls though. A neat control trick that works wonderfully is the braking area of the screen doubles over as the e-brake, which is activated by simply sliding your finger horizontally once pressed. This eliminates a visible on-screen button and will have you drifting corners accurately in no time at all.

Much like the controls, the graphics are another area that 2K Drive shines. While they aren’t quite up to par with Real Racing 3, the game still looks great. The trucks will slowly build up mud when tearing down the dirt tracks and damage modeling is quite impressive for a mobile title. The game also boast a large assortment of licensed vehicles that you can upgrade and customise to your liking. But it’s just here that you’ll find the weakest link: menus. To put it plainly, the menus are just clunky, not to mention lacking any sort of background music. You’ll get used to the menu setup over time, but prepare to spend a good bit of time sorting through them going in – it is worth it in the end though. 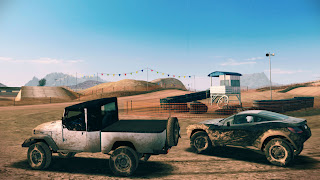 A few areas that do need a bit of work is the in-game sound effects and the occasional instability issues when launching the game. Depending on the vehicle being driven (usually cars), I’ve noticed that there are times that I can barely hear my vehicle’s engine effects. This is by no means a deal breaker, but it it’s very noticeable when it occurs. I also found some minor frame rate drops while playing on my 4th generation iPad when things got cluttered in the race pack, but it stayed smooth when playing on my iPhone 5. If you own multiple iOS devices, you’ll be glad to know that 2K Games puts iCloud to use incredibly well here, by keeping your game save updated automatically for you, which eliminates the trouble of remembering which device you last played on.

I don’t like to compare two video games together numerous time in a review, but the competition between 2K Games’ 2K Drive and Firemonkey’s Real Racing 3 is just too close. 2K Drive’s decision to not be a free-to-play title brings with it a gaming experience that’s more akin to a home console title, allowing you to strap into the cockpit and race for hours on end without the fear of reaching a paywall. With its fantastic asynchronous multiplayer approach and sometimes crazy mini game styled events, those looking for another solid racing title on their iOS devices to sink a large chunk of time into will find their $6.99 USD investment here well spent.