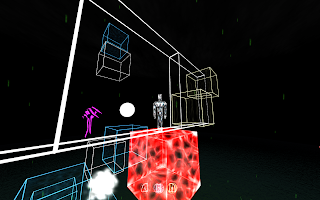 Sometimes one, single, interesting mechanic can be the reason to play a game. Without its bullet-absorption mechanic, Ikaruga is another unremarkable Japanese 2D shooter. Without its dimension-flipping mechanic, Fez is a pretty but mostly unremarkable 2D puzzle-platformer. Without puck manipulation, Scatter is a breakout clone that is successful at cloning frustration.

Irritum comes close to having that one interesting mechanic. By all other means, Irritum is, mechanically, a standard 3D platformer; The player maneuvers their way through a series of varied platforms by means of jumping. Yes, there are several more mechanics within the game than simply jumping, including a player-controlled, platform-changing mechanic that arguably fits with the story and cold aesthetic of the game, but in the end the player is still jumping at a rate similar to that of Mario.

Their are two stories in Irritum, one of the past and one of the present. The story of the past details how the player character got into a coma. The story of the present details the player characters journey to revive himself from his current state, being guided by two mysterious figures. The first figure asks the player to simply trudge on and ignore any unnecessary activities. The second figure urges the player to collect glowing orbs which restore the main character’s memories, with the past story solely deriving from the collection of those orbs. 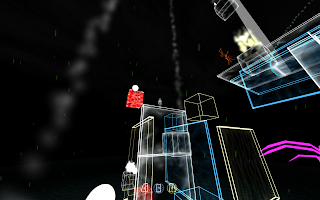 The glowing orbs are where the potentially interesting mechanic lies. The player has the choice of collecting orbs and wasting precious time or not collecting those orbs and learning nothing about themselves. This combined with the traditional appeal of acquisition and hoarding that most players enjoy could create a very engaging dynamic. Unfortunately, the mechanic does not work to its fullest potential.

The problem lies in the execution of the consequences of collecting those orbs. The only noticeable change between avoiding all of the orbs in the game or collecting any amount of them is the game’s ending. Levels don’t change, the guide-like figures don’t berate you… nothing really changes, and that harms the game’s ability to convince of the the consequences to your actions. The player experience of the game is ultimately the same no matter what you do. While it’s fine that a game has collectibles that exist solely for the sake of existing, when you’re talking about a game that deals with some pretty weighty material – in this case, suicide – there’s far more potential to ask serious questions of players as they explore the game’s world.

As a series of platforming challenges, Irritum is a reasonable choice. The controls are tight enough, new mechanics are introduced every few levels, the challenges escalate at a steady pace, and both the visual and audio design are easily tolerable. But as something more than a collection of 3D platforming levels, and in terms of what the game wants to be, it unfortunately fails. Irritum doesn’t want to be a standard platformer. It’s taking on one of the most distressing themes that exist, and ultimately it does more to expose the challenges in making “artistic” games than justifying them.