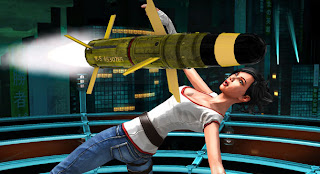 Apart from its undying love to the way of the pinball, it seems like developer Zen Studios is just as passionate about kung fu and dance music, and it shows in KickBeat, the team’s latest PlayStation Network title. Music gaming has been on the decline as of late, but KickBeat harkens back to the early players in the world of console music gaming, such as Frequency or Elite Beat Agents, and then changes things up by mixing the likes of heavy metal, rap, and kung fu moves. It’s an odd premise for sure, but Zen Studios has made a formidable attempt foraying into the music genre, even if it’s a slightly underwhelming one.

Like most games in the genre, you shouldn’t come in expecting a well-told narrative. You are put in the shoes of Lee, your everyday teenager who is on a mission to find the Sphere, a (for lack of a better term) “ball” of energy that represents the spirit of all songs, past, present and future. It’s a throwaway story, and one you won’t be too invested in, but it fits so well within the context of KickBeat’s cheesy universe that it comes off as sort of endearing. 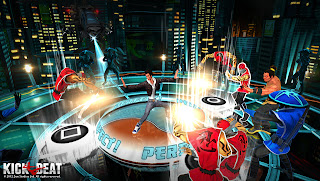 As a hero of music, KickBeat tasks you with beating down hundreds of thugs who encircle Lee and attack him against the backdrop of music. Masked ruffians and baddies are all color-coded, and you’ll face off with them in pairs, on the offbeat, and in rhythm with whatever song is playing in the background. Each stage is based around a different track, with a corresponding look and difficulty. Lee is centered in the middle of the screen, and enemies surround and attack him in a set pattern. By pressing the matching D-Pad or face button, Lee will attack in the proper direction, roundhouse kicking and uppercutting enemies into oblivion. It’s essentially a re-skin of a Hatsune Miku or Dance Dance Revolution-style game, just presented in a slightly different way. Like the titles it takes inspiration from, racking up combos increase your score dramatically, and taking too much damage (by missing too many notes) will result in Lee’s health depleting.

Once your health bar is depleted, it’s game over. In a system that works a little like Rock Band, beating up people nets you Chi (the game’s equivalent of star power), which helps you earn more points when you’re consistently keeping a combo. 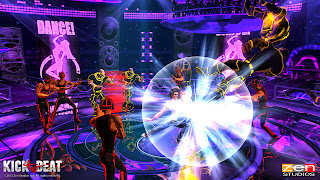 While most titles will do everything to make sure you can keep on rhythm, KickBeat has an enchanting feeling which masks where the real challenge comes in. Regardless of your familiarity with the song and its beat, the difficulty quickly ramps up. Enemies are constantly on the move, and the pulsing beats and feeling of a crowded dance club works well in throwing off your concentration. Lee will even go as far to pull off impressive fight moves, which (while they are fun to watch) only serve to break your focus. It’s not unlike the principle which Rhythm Heaven is based off, where half the challenge comes from tuning out the visual flair and simply focusing on the beat.

Still, the game’s biggest flaw comes in the setlist. Even at the low price of $10, the game features a paltry 18 songs, and for the most part, you’ll probably go through the game and only recognize a handful of songs at most. There is the option to import your own songs, but the game doesn’t auto-generate a level for you, instead requiring you to initially tap alongside the song’s beat in order to establish the BPM (beats per minute), and then creating a level which only focuses on the beat. It’s a nice way to extend the length of the game (which should only take you a couple of hours to go through on your first time), but the levels that the game creates are nowhere near as involved as something like Audiosurf.

And for those looking to try out higher difficulty levels, you won’t have the option to try out harder difficulties until you clear a song on the previous lower difficulty settings. It’s a very frustrating and archaic way of withholding content and artificially lengthening the game, and it’s only real purpose is to frustrate the player.

The biggest factor when it comes to recommending KickBeat is its short soundtrack, which is comprised of lesser known rap, rock, and metal tracks from yesteryear. Still, if you’re dying for a rhythm game and you don’t feel like waiting on Harmonix to release a sequel to Amplitude or Frequency (or if you aren’t in the mood to import Osu! Tatakae! Ouendan), then KickBeat might just be the rhythm fix you were looking for.