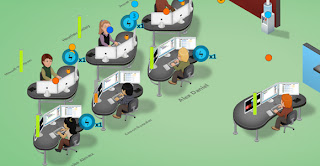 It’s often quite disheartening when two games turn out to be incredibly similar affairs. Game Dev Tycoon, the first entry from Aussie startup, Greenheart Games, plays much like its inspiration: Kairosoft’s mobile hit Game Dev Story. But the last thing I’d want is for this review to serve as a blow by blow comparison of the two, since each title has something new to bring to the table. Game Dev Tycoon promises to be a more realistic experience by dwelling upon the business and management end of running a game studio, although the end result is a bit of a mixed bag.

Just to start off, it’s perplexing that a studio’s first entry into the world of game design would be a game about game design. Such games would greatly benefit from industry experience, especially since this one aims to take a more realistic approach. Thankfully, the developers at Greenheart either have a deep seated love of games spanning from the Commodore era until the modern day or did so much research that they could effortlessly feint that love. Game Dev Tycoon plays like a history book, with the same thinly-veiled console names employed by Game Dev Story but with more emphasis on market trends. It wouldn’t be a great idea to invest too much into the DreamVast, for example, when the Playsystem 2 is near release. But all that said, you can’t help but wonder just how realistic the experience can be when the developers themselves are rookies. 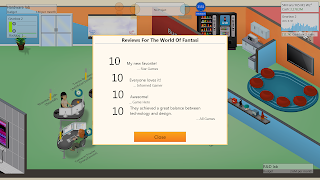 The game starts you off in a garage making self published games, and you really do get a sense that you’re cultivating an empire as you play. Player development manifests in the form of research tasks, which open up new options while developing. Perplexingly, critical business and game developments such as marketing and custom game engines are tossed in alongside more inconsequential improvements like 3D graphics and save systems, which means the first few playthroughs can be daunting when you spend valuable resources on something that has minimal impact on your game’s success.

Game quality is measured through two variables: design and technology. It’s interesting to see that this game chooses to measure games in their artistry and mechanics, rather than breaking down the more traditional categories of gameplay, graphics and sound. This approach allows you to split your studio between creative minds and heavy programmers, and wise human resource management quickly becomes the key to efficient game making. The interface lends nicely to these strategic decisions, being a very slick and modern design featuring sliders and drag-and-drop inputs. It treads a fine line between feeling like fun and feeling like work, so it’s definitely not an experience for everyone. 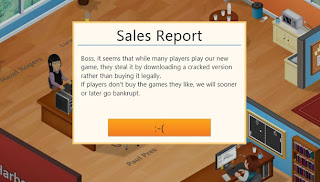 After the easy-paced garage phase passes however, it’s clear that the name of the game is survival above all else. Stakes rise as the options expand, and soon you’ll find yourself battling review scores and even your previous performances as you try to stay relevant in a rapidly evolving industry. Technology and research advances relentlessly, so making two games back to back with no research in between is a sure fire path to underperformance. Money also becomes scarce and you’ll learn to value every high selling game even if it was achieved via pandering to the bases. It’s a sobering look upon the precarious balance the game industry faces between artistic expression and the need to rake in a profit. As with real life, it’s rarely possible to achieve both of those goals at once, and perhaps Game Dev Tycoon can help players empathise with developers who have come under fire lately for “selling out”. Especially in the late game, each new project can be stressful and even unfair at times due to external influences, at times trading fun for realism.

Furthermore, the folks at Greenheart Games have tossed in some tongue-in-cheek dilemmas for players, such as fan-created content and gender representation, which go to great lengths to provoke thought. I did find myself wishing that these choices would have some lasting impact on gameplay however, instead of being throwaway ideas. 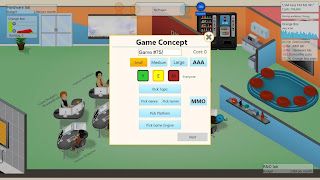 Thus, Game Dev Tycoon manifests as a competent business simulator, but unfortunately offers a one sided view of game development. The nature of the video game industry as a competitive and progressive environment is emulated adeptly through the gameplay, but player success is measured in solely monetary gains and review scores. It’s impossible to create a story based artistic game which polarises the critics, for example, and there’s no reward for even trying. Goichi Suda would fail at this game. Combining genres in unorthodox manners is actually punished as the consumers seem to have their own idea of what works and what doesn’t, and the player is helpless to do anything but submit to their demands.

Greenheart Games does need to be commended as they’ve crafted a solid, intelligent and well researched first entry into game design. Management genre fans will have much to love about Game Dev Tycoon, as it’s not afraid to punish players for making irresponsible decisions and squandering resources in a market in which failure is unfortunately not an option. Whether intentional or not, Game Dev Tycoon acts as a thought provoking satire of a supposedly creative industry limited by harsh competition and the looming threat of bankruptcy. It is quite a hard game to recommend, as it’s not particularly fun unless you have a deep love of management. I just wish that the developers expanded more upon the creative possibilities the industry offers in addition to the economic environment.