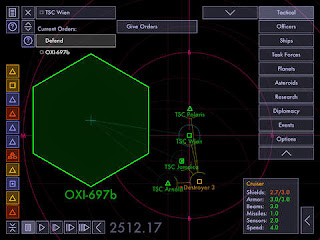 Have you ever played Harpoon? Possibly not, it’s a rather old game and even when it was new it was a niche within a niche.

But if you’re a fan of strategy games then Harpoon, even now, is an accurate simulation of real military strategy and conflict. It’s also clearly the inspiration for space strategy game Tactical Space Command, a new iPad game that is almost overwhelming in terms of both depth and reward.

It looks like a bit of shovelware, right? A black background, some coloured circles representing planets, and then little blocks and triangles representing ships. How can a developer expect players to pay a premium (by iPad standards) when they can’t even produce “real” graphics? Well, welcome to the world of abstraction. The reality is that these sub-strategy genres do have their own kind of aesthetic appeal; as a player it makes the action feel cold and methodical as it plays out on screen. As someone who is a pacifist in real life, I often end up developing some kind of bond with my units in strategy games, and this colours my strategy. Inevitably I find myself playing most strategy games in a very conservative manner.

With games like Tactical Space Command and Harpoon, I’m liberated from the connection I have to the units thanks to its sheer abstration. As a result I find myself deliberately sending units to their death where I can get a strategic advantage from doing so. I become a Napoleon, an Alexander the Great, a Genghis Khan. Or I like to think. The reality is that I don’t have a clue how those historical military greats were able to so expertly order their troops around, but learning strategy through games like this is a fun process. 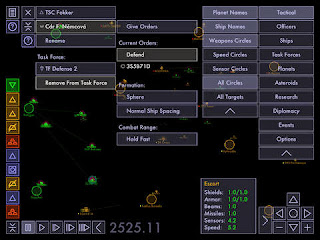 A game like Tactical Space Command comes with a certain degree of baggage that players need to accept before the game will accept them. One is a clunky interface. I don’t think the menus-within-menus could have been made any more intuitive than this, it’s a natural consequence that when you have so many different things to look after – from unit production and technology research through to assigning leaders to individual space space ships to forming fleets of ships to adopt specific formations. Then you’ll need to protect your supply lines while attacking your opponent’s. There’s a lot to manage in this game and while the tutorial explains the basics well, it took me a good dozen games before I felt confident with what I was doing. The fact that the AI is surprisingly decent (across six difficulty levels) given that this is an indie production and there is so much for the AI to manage helps extend the longevity and learning curve of the game either further.

Now, nominally this is a RTS, and as long as the “play” button is on, the action actually progresses quite quickly for a game that has so much going on. Thank goodness for the pause button, which allows players to stop, recollect their thoughts and issue the next set of commands. The game also auto-pauses when something important happens that needs immediate attention. One of the facilities has finished building its last battleship? The game pauses and gently reminds you do go build another one. That auto-pause feature quickly becomes your closest friend as you struggle to keep up with all the information this seemingly-basic game is crunching at any given moment.

There are 14 scenarios in this game (as well as a “random scenario” which is inconsistent in quality). It’s disappointing that there’s no online play as I am a firm believer that strategy games are best enjoyed online, but for its asking price there is plenty of content. To say this game is designed for a niche audience is an understatement, but in the absence of the actual game of Harpoon on the iPad, I’m certainly not going to complain about Tactical Space Command being there.

Disney Infinity Toy Box on iOS; everyone (including Nintendo) should pay attention to this

Exploitation or humour; let’s talk about Dead or Alive 5