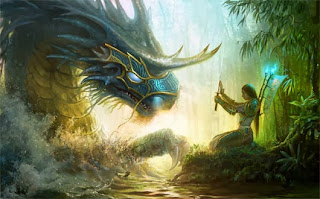 We love Might & Magic: Duel of Champions at Digitally Downloaded. In fact, true story – on those nights where my extreme insomnia has me awake at 1am in the morning, the timing has been just perfect for some heated battles of cards with Nick from our US team.

So I was happy to see a press release land in my inbox announcing a big new expansion to the Duel of Champions universe. One year after the original game released we now have the Forgotten Worlds expansion.

(Read our interview with the director of Duel of Champions here)

Forgotten Worlds adds an additional 150 cards to the mix (and I just finished collecting the last bunch… sigh). These cards include a whole new faction to play with – Academy – which is apparently something of a glass cannon for people that like betting it all in high-stakes action.

There’s also some new trading mechanics worked into the system that will allow players to dump a bunch of useless cards for something a little rarer. Still no opportunity to trade cards with other players though, unfortunately.

Still, this update will be worth a look. Duel of Champions is playing a big game and wants to join the likes of League of Legends in having a “professional” league, so for the more serious gamers out there, here’s a game that’s worth looking into.

Yaiba: Ninja Gaiden Z has just hit the top of my “do want” list