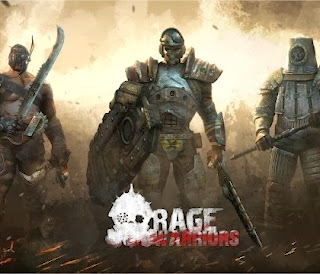 I grew up on console gaming, especially loving the fighting game genre. Sinking many hours with my mates into Mortal Kombat on the SNES, Street Fighter on the SEGA Mega Drive and Super Smash Bros on the Nintendo 64, it started a huge appreciation for the genre, and with that naturally comes an affinity for brawlers. With the uptake of touch screen gaming, it is clear that it has been an incredibly difficult process for both of these genres to make the switch. Touch controls just don’t offer the finesse and complexity that a great fighting game on a console does. Rage Warriors is a game that suffers due to the limitations of the medium.

Offering a simple fighter with not too much to remember in terms of combinations, Rage Warriors biggest problem is the fact that it’s on iPad. Otherwise it’s a game that offers a decent challenge and an overall solid fighter. Set in a dystopian future, this is a four-level game where you have to make your way past seven fighters, including a boss, on each level. This gives you plenty of time to work out the intricacies of the game. Interestingly, the bosses weren’t the difficult part, with the game giving them easily predictable and exploitable flaws. However, the regular opponents aren’t all easy, especially when they mix up the weapons forcing you to changing up your tactics. 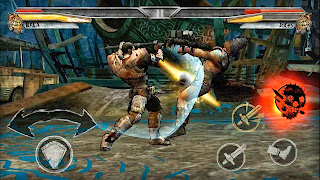 Rage Warriors starts with you in a grotto, fighting AIs with a sword and shield, while you have to win your way through them to improve your weapons and armour. As you work your way up, you move through only slightly better looking locales over the levels, although they really isn’t all that important overall. Having the difficulty ever present is great and refreshing as you have to use some tactics to make it through the levels and can’t purely button mash through the game. Even if you try to after upgrading your character, it is more about choosing weapon and armour combos to counteract the attacks from opponents wielding the single sword, double sword, axe or the claw. Personally, I found the double swords the best – fast, still with a decent block, although my ideal pair came quite a ways into the game.

The fighting involves plenty of stabbing and slashing, which is a great looking mechanic. You can combine combos for greater effect and each of the weapons has its perks and problems, as with most games, allowing you to find the right combination of attacks to work through the levels for various playing styles. However, the key comes from the special attacks. Once you raise the power bar all the way, you can perform a devastating attack, assuming your opponent hits you. There is great pleasure in timing your special at just the right second, the AI is quite intelligent and can time it right back at you. You can also sacrifice part of your power bar perform a slightly weaker attack with a combination you can choose and unlock more moves as you progress through the game, they worked out an effective fighting mechanic. 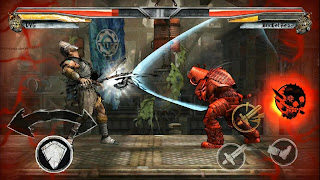 As I said earlier to earlier, difficulties arise when it comes to the controls. The iPad just isn’t built around action games. To be successful you need to be able to block and attack. However, the unresponsiveness of the iPad makes this incredibly difficult meaning you can’t stop opposition attacks. It also makes timing difficult. All it reinforces throughout the games is that the iPad isn’t really made for fighters. There is something about console controllers and hitting a button at just the right moment that doesn’t translate to a touch screen once the action ratchets up.

At $2.99, it is a great value app with high quality graphics and really no need to buy more shells, the currency of the game. If you don’t want to have to wait to buy the best gear, you can invest in in-app purchases, but they are really quite reasonable, offering more shells than you could possibly need. It’s actually pretty refreshing as the game is not all about requiring you to buy currency to be able to defeat the game. While there is an extensive range of weapons and armour, and plenty of combinations that you can choose, you will work out the weapons that you like pretty quickly.

For a touch screen fighter, Rage Warriors is a fun game. With a complete lack of narrative, it is all about the fighting. The price is more than reasonable, it does not require in-app purchases and winning fights actually feels like you’ve achieved something. At the end of the day, it is nothing new but is clearly made by developers who love fighters. It is the fact that you are also battling the iPad as a controller that makes the experience frustrating.