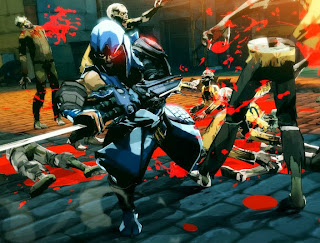 I was able to get some hands-on time with Tecmo Koei and Keiji Inafune’s upcoming Yaiba: Ninja Gaiden Z. It’s a game that didn’t really appeal to me beforehand – it’s another zombie game, after all.

But then I started to play and something happened. I played for five minutes, put the controller down, pulled out my phone and navigated over to Wikipedia. I just could not believe that Goichi Suda wasn’t involved in this game. And he isn’t, but it still surprises me that he isn’t. From that moment on I was interested; its fair to say of all the Japanese developers out there Suda is the one I respect most for his taste in surrealism and subversive art, and any game that is able to successfully emulate what Suda does has my undivided attention.

Yaiba looks like a Suda game in motion. The rich cel shading is reminiscent of Killer is Dead, while the hyperkinetic combo-heavy combat features the excess of gore and sheer brutality of… well, most of Suda’s games. The action is so heavy that it is at times difficult to follow everything that’s going on, and the camera wasn’t a great help (also typical of Suda games). But I didn’t actually have a problem with any of this because you are so ridiculously overpowered that the common zombie enemies are more there for show than any kind of challenge. 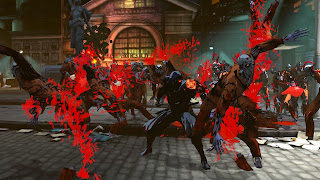 Through the hands-on trial I followed a rather linear path of jumps and wall runs, split by hordes of zombies. Then came the most glorious Sudaian (yep, I think the guy deserves to have a style named after him) moment; a set piece in front of an adult store adorned by two giant, gaudy, woman’s leg statues sticking up into the air. A unique sign for a shop, to be sure. The path is blocked by flame. The way to deal with that? Go to the end of the street, grab a zombie, throw him into a nearby truck. Somehow said zombie will start to drive the truck (hilarious to behold, trust me), hit a ramp and go sailing through the air to land – yes, you guessed it – right between the two women’s leg statues. Building blows up, and the sky starts raining women’s underwear.

It is so gloriously over-the-top and surreal that I’m almost certain this game will be slammed by critics for any number of reasons when the game is released in full. Just as Killer is Dead and Lollipop Chainsaw attracted criticism from people who, to this day, I am convinced didn’t really play the games or try to understand them, Yaiba has that transgressive, edgy style to it that is both polarising and very interesting. 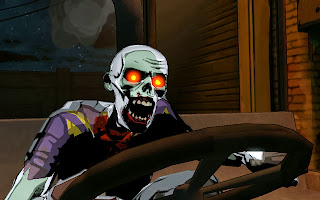 Then enters the first real boss battle for the game. This boss, if he was a real boss and not just a mini-boss, was a bit of a step backwards from the amazing multi-tired battles that Suda is so well known for. Given that the boss battles are the only part of a Suda game that can legitimately be considered top-quality gameplay, it does seem from the short time I had with it that Yaiba is a somewhat inferior piece of interactive entertainment to something like Killer is Dead.

But I don’t play these kinds of games because they are “games”, any more than I picked up Gone Home expecting a thrill ride to rival Call of Duty. I’m a firm believer that a game can have merit despite not being much of a “game” in the traditional sense, and from my short play with Yaiba I am so very keen to see whether the initial surrealist vision can be maintained through its entire play length. Because if so, I may well have yet another new favourite game.

Interview: The man that made a game about suicide