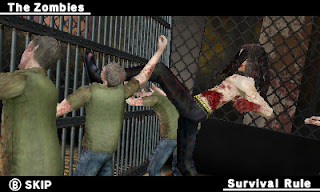 The title is explanation enough. Undead Bowling is a bowling game that features zombies as pins with a gritty, post-apocalypse setting. It’s not original and it’s definitely not engrossing, to be quite honest. With the 3DS limitations, it’s a choppy, blocky mess with a laughably small amount of content considering its asking price.

Four playable characters are offered to the player right off the bat. Each character can be played in the same three modes that are possible to complete in under an hour. Survival – which is something no one expected from a game with zombies in it – is where you’re expected to survive being killed by the zombies until the final round. Hunt involves demolishing as many zombies as possible, while Combo involves meeting a requirement for slaying a certain combination of zombies before continuing onto the next round.

Survive? You ask. Aren’t the zombies just pins? Well, yes, but they also slowly amble up the alley, and if any of them reach you at the end, that’s when it’s all over, red rover. That there is Undead Bowling’s unique hook – the pins fight back. 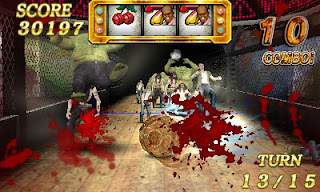 Unlike in realistic bowling simulators, Undead Bowling breaks away from the formula in fairly shallow manner. Instead of angling the ball and hoping for the best, you’ll have full control of the ball until the end of its run.

Unfortunately it’s difficult to do much with this control since from the point where you hit the first zombie gore covers the entire screen making it difficult to see where to angle the ball next.

When zombies get too close, they’re tagged with a red warning sign. If they go unkilled, they will damage your health gauge, eventually resulting in game over. That’s how you lose. Actually, it’s fairly hard to lose especially when the enemies move an inch or two further down the alley every turn. And things are even easier thanks to the one power up in the game: the fire ball. The fire ball is a flaming bowling (you don’t say… ed) ball that obliterates the alley’s inhabitants if used effectively.

Undead Bowling’s absence of content is disappointing. After you’re finished any of those game modes, your only options of replay value is a different difficulty setting. There’s no online leaderboards, no online multiplayer, no offline multiplayer, no bonus missions, and only one unlockable character that takes twenty minutes to finish.

Undead Bowling does nothing outstanding. It’s a joke that was funny the first time, but just plain boring the second. Its lack of replay value would be forgiven to an extent if it was a fun game to begin with. Unfortunately, a bowling simulator with zombies probably won’t strike many as appealing and if you were thinking of downloading this off of the 3DS eShop, do yourself a favour and think again.

Interview: Developer of Black Annex on making a game as a hobby

Why games need to be shorter