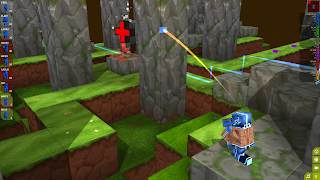 Well, this is a neat bit of news for the Australian game development industry; Australian indie developer, Nnooo, has just announced its first foray into third-party game publishing.

The developer, behind such hits as escapeVektor and Spirit Hunters, is lending another Australian developer, 3 Sprockets, its Nintendo expertise to get the iOS megahit, Cubemen 2, published on the Wii U.

This is the first game that Nnooo will have published that it has not developed itself.

This would seem to be part of Nintendo’s push to get more indies involved in Wii U development. The company has traditionally struggled to get smaller developers to create content for its consoles, despite the existence of download platforms like the eShop, WiiWare and DSiWare, with indies complaining about bureaucracy and limited traction with consumers from these platforms.

However, Nintendo has been actively trying to encourage more indies to look at the Wii U platform. Nnooo, meanwhile, has seen continued success with Nintendo over the years, right from the launch of WiiWare and Nnooo’s own game, Pop, and it looks like the Japanese giant has a new ally in sourcing and publishing a wider range of indie games to come out of Australia going forwards.

In a press release, Nic Watt, creative director of Nnooo, said “I’m really proud to be able to announce this.”

“We’ve spent the last few months working with both Nintendo and 3 Sprockets, the game’s developer, to make this a reality. Cubemen 2 is an amazing game and a great fit for Nintendo players. We can’t wait to see how creative they are, whether in tactical multiplayer online or in the new levels they build.”

Why games need to be shorter