If the name alone of this short little freeware visual novel does not automatically cue you in that this is not a major production title, feel free to stop reading this review right now. Standing against violence in video games is something that hardly any major publisher would ever dream of doing, as it would be railing against their own business models, after all.

Developer, Bento Smile, isn’t afraid to tackle this controversial subject at all though. In The Life of a Pacifist Is Often Fraught With Conflict, you take up the role of the pacifist cat whom has just recently signed on with a video game developer. Instantly, your desires to not be involved in violent things becomes an issue, seeing how the game that is currently in development at the studio is of the action/shooter genre.

Embarking upon this short cartoony journey, you never actually speak, but make mental decisions that affect the outcome of the game. There are four different endings and these tackle different controversial aspects that violence in video games produce: desensitization, conflict, morality, principle, etc. As you make different decisions, not only does it change the final outcome of the game, but the other characters’ moods are altered as well: objecting to increasing the violence in the game will find their mood darkening and their desires to continually add more and more violence to the game spike even higher, while going along with the violence makes it a smoother journey overall.

But what does it all mean? Well, that’s the beauty of a video game standing up as a true art form – it tells a story that is to be determined by your own perception. I recently had the chance to witness one of my favourite artist’s work, Pablo Picasso. As I stood in front of one of his many Cubism styled variations of The Seated Woman, sucking in every single stroke of its master’s craftsmanship, I was filled with a flurry of emotions: admiration, amazement and inspiration. But there were much deeper emotions felt as well that stemmed from the work of art itself: such as fear and curiosity. Why? Because the art style used in this particular piece was very dark and brooding, yet I could feel Picasso’s amazement with the human female body through his work. It seemed as if when he painted this particular picture, the woman he loved and desired to know the fabric of her entire being was unreachable to him – maybe even recently left him forever? When a true artist expresses themselves through art, the emotions that are hidden beneath can carry forwards for centuries thereafter – I felt this in front of Picasso’s work. 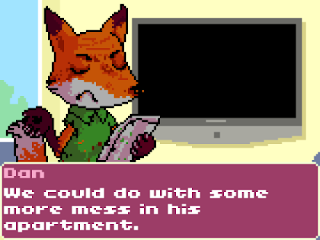 Bento Smile’s work, much like Picasso’s, hides a much deeper meaning beneath its cartoony appearance. While a single playthrough is a mere five minutes long, in that short time so much happens just below the surface, that unless you really pay attention, you will miss it completely. The pacifist cat is a symbol of peace and nonviolent resistance, which is why you don’t actually speak in the game – it is your nature that sways the moods of those around you, not your words – just as the peaceful, nonviolent methods that anti-war protesters use to much effect. As previously stated, the different endings take things much deeper and it will be up to you to decide which one is the best fitting, or whether any of them fit at all; right or wrong, it doesn’t matter. What matters is that you’re left with something to think about, something to reflect upon, or just maybe, challenge your own views/ opinions of the morality for or against violence.

When a video game developer chooses to step away from the current gaming models and tackle an extremely controversial subject, like the violence in video games (and furthermore, the desensitization towards violence in the world today in our entertainment mediums), it just might find itself, whether intentionally or not, pushing video games as an artform further into validity. Bento Smile has done just this with The Life of a Pacifist Is Often Fraught With Conflict and I tip my hat in applause. If it wasn’t for the soundtrack becoming quite grating on subsequent playthroughs, I’d award it a perfect score.

Review: Pokémon Rumble U (Wii U)

Pokemon games are popular. Who knew?