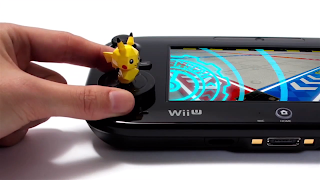 Back when the 3DS didn’t have much software to speak of, I found myself hopelessly addicted to Pokémon Rumble Blast. It was addictive in short bursts and offered a nice little level structure that had me wanting to replay levels over and over again to catch all the critters.
Pokémon Rumble U is not Pokémon Rumble Blast. In a massive backstep from the strides the 3DS game took for this sub-franchise, Pokémon Rumble U is little more than the Wii Pokémon Rumble game.
In other words, in this game players are thrown into small arenas with a couple of waves of enemy hordes to deal with via button mashing, and then an end boss that comes about a minute into a level which is only difficult because it has an obscene amount of health. There’s no levels to wander through and no real incentive to replay levels because they are all some variation of a boring, bland, circular arena. 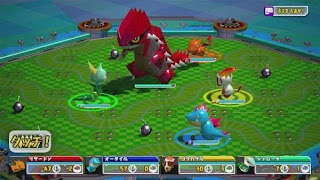 Because the arenas are so small and so packed with enemies it’s difficult to really see what’s happening. A lack of impact when my little ‘mon was attacked also meant that when the action really heated up I would often be taking damage without really being sure where the damage is coming from. A lot of people will argue that doesn’t really matter – even the bosses are easy to beat provided you’re using the most powerful critters in your collection – but I’m one of those crazy people that likes to be able to follow what’s going on screen. The lack of visual feedback guarantees that the only strategy through the game is via button-mashing, and once a game drops to that point it’s difficult for it to recover from there.
The big feature that this game offers that Rumble Blast on the 3DS didn’t is local multiplayer. It’s a kind of competitive co-op where you’ll work with your buddies to fight the enemies, but at the end of a level an individual winner is decided based on enemy KOs, loot gathered and so on. It’s hectic for sure and for one or two levels it’s downright fun to see who comes out on top at the other end, but once everyone has realised there’s almost no skill involved in this game even Nintendo Land is going to start looking like a deep multiplayer experience. 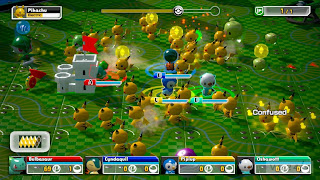 On the positive side of things, the game does enjoy a simple but charming visual aesthetic that trades complex animation and detail for a virtual recreation of wind-up toys running around. It’s fun and bright, and fits with the Pokémon theme perfectly. The music hasn’t changed through this series, but it’s hardly noticeable and therefore no one is going to care that it’s repetitive and generic in the extreme.
The biggest feature in this game is undoubtedly the physical Pokémon miniatures though. This is the first game that makes use of the Wii U gamepad’s NFC chip and allows players to take a physical figure and “scan” it into the game – Skylanders style. While the normal in-game miniatures aren’t upgradable, special pokémon scanned into the game can be upgraded and they’re the only way that players can form the kind of attachment to their team that normal Pokémon games offer. These Pokémon have their data stored on the physical miniature allowing you to pick up and play where you left off on anyone’s copy of the game. It’s a really neat feature and the Pokémon miniatures themselves are the adorable kind of cute that makes them worth collecting. The fact that you buy them in random packs also makes them a money spinner for Nintendo by playing into the same OCD that makes the likes of Magic the Gathering a massively valuable product. 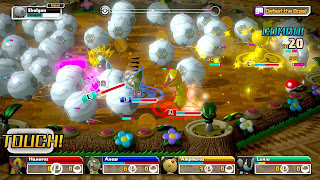 …Except the miniatures are not actually available in Australia at time of writing. I’ve gone to a dozen of the major game shops throughout Sydney and not only did the shop assistants not know of the release date for these miniatures (if there is one at all), but they didn’t even know these things existed.
It’s very poor marketing on Nintendo’s side for not making the retailers aware of this game. Yes it’s a digital download, but it had a physical component that is going to be lucrative for anyone but Australia’s game retailers.
And frankly without those miniatures Pokémon Rumble U loses the one feature that made it worth a look. Given that I’m an Australian critic and have to review the game based on the conditions it has been released under, I’m giving it a “no go” rating. You can add a star if you’re from somewhere else and have ready access to the miniatures, but be aware that they do come in random packs and short of eBay catching ’em all is going to cost a pretty penny.

Review: The Life Of A Pacifist Is Often Fraught With Conflict (Ouya)