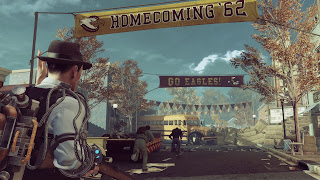 Watching what Edward D. Wood thought would be his magnum opus, Plan 9 From Outer Space, it’s easy to see how much care went into such a flawed product. Wood was a truly horrible director, but the ideas found within his work were remarkably progressive; he’s a man that cared deeply about issues from environmentalism through to gender roles in society (another one of his infamous films, Glen or Glenda), and these themes were genuine and quite intelligent, even if they were packaged within total tripe.

No small surprise that it was Johnny Depp and Tim Burton that would make the film of his life, then. Burton, a victim of surburban life himself, clearly saw a kindred spirit in Wood, and used the film Ed Wood to give the world a biopic of a man with genuine enthusiasm, intelligence and a great love for film crippled by circumstances and a lack of talent for working in his favoured medium. Burton was lucky enough to have talent, Ed Wood did not. 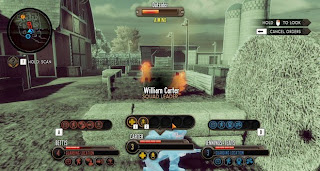 What does all this film talk have to do with The Bureau: XCOM Declassified? In some ways, it’s like Plan 9 From Outer Space. Not because it’s a bad game (it’s not), but because it exhibits a surprising number of themes and social concerns common to that film, as well as a sheer horror for the banality of suburban lifestyle. It’s set in the 60’s but it’s an overwhelmingly modern game, fearful on a metaphoric level for the cultural, social and political challenges we face here in 2013. And, just like Plan 9, XCOM Declassified is also a greater vision than its technical realisation.

Agent Carter is a hard fellow. He lost his family via a tragedy while he was away fighting at war, and it left him with a no-compromise dour personality that just happens to be perfect for a game, because it also means that he gets to run around playing hero with no consequence. As Carter runs through supposedly idealic subruban paradises built in accordance to the American dream and fights around symbols of 60’s Cold War monuments to American politics only he, the person who has rejected that wholesome lifestyle and culture is able to save it. By shooting up hordes of “outsiders” that are invading that way of life, naturally. It’s a B-grade narrative (with performances to match), but it contains many of the same themes of fear that alien films of the 50’s and 60’s were filled with; the threat of an attack by “outsiders” (Communists), the fear of weapons escalation and a distrust of Government. Declassified throws in a rejection of mundane suburban lifestyle as part of the empowerment fantasy that all games feel the need to work in, but the question that needs to be asked is Declassified a particularly faithful homage to the pulp fantasy of the 60’s, or an argument that those same fears still exist in society today? 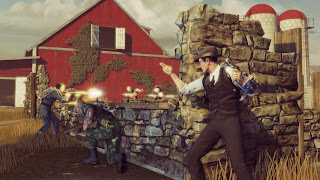 It’s a good question, because Declassified might be painted by 60’s colours, but for all intents and purposes it plays like a modern military shooter. Guns behave in much the same way as they might in a Battlefield or Call Of Duty game. Level design follows the same pattern of “corridor-open area for skirmish-corridor” of those aforementioned games. Declassified plays like a modern shooter, which at first feels like an awkward juxtaposition given the environments it takes place within, but then the message hits home – the themes that upset Wood so far as to produce really bad films are as applicable now as they were back then.

At times the game’s delivery is laboured and this put me off it in the early stages despite the appealing narrative and theme. Agent Carter was an especially irritating character thanks to a limp attempt at a gravelly voice, and the entire engine looks like it’s from a previous generation of development technology. Comparing the level and character design of The Last Of Us with Declassified reveals the difference that having a big budget can make. The aiming and movement is also not quite as slick as I would like, and as much as I applaud a game not having multiplayer thrown in for the sake of throwing in multiplater (Hi, Lara Croft), co-op would have been an interesting inclusion here. 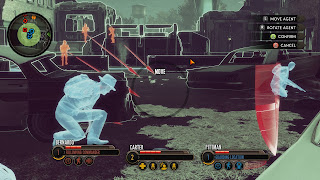 But then I realised something – Declassified isn’t really a shooter. At about the two hour mark I realised that if I was going to make any progression in this game at all I was going to need to think tactically and making effective use of my team mates rather than than firing off rounds myself. I quickly became a fan of the command wheel, which works like those found in the Mass Effect games, and the cover system, which works just like the excellent system found in XCOM Enemy Unknown, but sped up.

At about that two hour mark, Declassified stopped being a shooter as far as I was concerned and became a squad-level RTS game that just happens to trick people into thinking it’s a shooter via the screenshots on the back of the box. And as such this became the kind of ‘shooter’ that I could get into and love for being intelligent, even as the bait-and-switch will no doubt annoy the dudebro culture to the extent that I am sure the game is going to develop a nasty reputation for being a “bad shooter.” Great. XCOM Enemy Unknown was a bad shooter as well, on account of it not being a shooter. 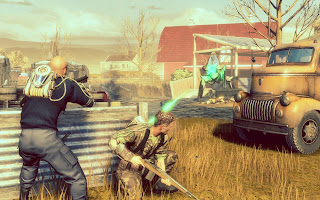 The more I played on, the more I fell in love with the game. I loved that there was permadeath, just like in Enemy Unknown and I loved that I felt pressure to keep my little dudes and dudettes alive through to the end of the mission because I didn’t want to lose all that time I had spent building up their skills. The bigger firefights, coupled with the relative fragility of the team mates produced some tense moments indeed. I also loved that environments were set up in a way that I could approach them tactically, and that I had a couple of different options in terms of the tactics I could adopt. It might be a linear game in terms of funnelling players from one firefight to the next, but Declassified at least gives players a couple of different options for getting through those firefights.

I also loved that by the end of the game I was left with the feeling that I had just played an XCOM game; something I had assumed would never happen when Declassified was announced. Sure it doesn’t have the same sheer depth of Enemy Unknown, but it’s surprisingly complex given what it could have been.

I was really worried about this game. In an era where developers seem more interested in boiling every beloved franchise down to a cookie-cutter shooter, it takes real bravery to break out and do something different. Bringing a legitimate tactics structure into the third person shooter genre has given us a game that genuinely feels like XCOM, but is also something a little new to play and as such I really can’t complain about this as I eagerly await the next “genuine” XCOM title.

Pokemon games are popular. Who knew?