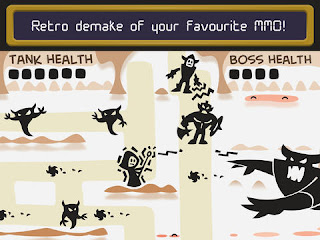 Consider this for a minute – if you deconstruct a game to its very core you’ll get something that is perhaps more primitive than we’d like to admit. For all the progress that we claim the games industry has made, the ideas behind the games we are playing are as simple as in the 80’s… and that’s before you make the argument that games have regressed.

What’s a tennis game if not Pong? Is there really that much “new” about New Super Mario Bros, aside from more detailed (but not necessarily prettier) visuals. For all the advancements we’ve made in AI development Europa Universalis IV isn’t actually that far advanced from the early Romance of the Three Kingdoms games.

Game of Watchcraft: Spawn of Squishy has a point to make; even the biggest, longest running and complex MMO can be reduced down to the simplest of games: a Game & Watch game. And in doing so the game reveals some real weaknesses in modern game design. 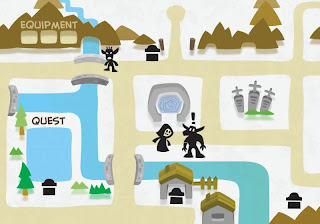 So what do you do in Game of Watchcraft? Run around the levels, accepting missions from people with little “!”s above their heads. These missions range from killing some goblins to collecting some chests to knocking down a boss. Once that objective has been met the “!” will become a “?”; report back and select the next mission. Rinse and repeat. There’s just one attack button and the game looks and plays like Nintendo’s old LCD screen games. Players accumulate experience and treasure as they play, too. The treasure offers some minor ability boosts such as additional speed or extra attacks, but the experience doesn’t do much more than increase the player’s score.

There’s no way to run into a Game Over here, and frankly, given that the sole reason that Game & Watch games existed was as skill testers, the complete in ability to fail means that there’s no real reason to play the game – there’s no compelling goal driving you to keep playing and get better. A single hit from an enemy means “death,” but in true MMO style players respawn. And it’s here that the developers make their most poignant argument against modern games; there’s no way to fail here. You just keep playing on and on and on for fewer good reasons to do so until you get bored and reset the game. While this doesn’t make Game of Watchcraft a compelling game in itself, it does make a great point about the repetitive grind of MMOs (and many other modern games).

There’s no way this game is worth the $0.99, but it’s certainly an interesting little work of cynical protest against some of the less desirable modern game conventions.