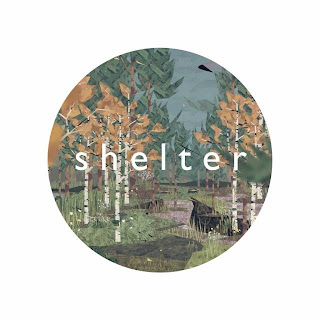 When developer Might and Delight decided it wanted to do something different coming off its successful release of the demanding platformer that is Pid, it wasn’t joking. With the gaming industry so overly saturated with shooters and retro, well, everything (including shooters), – where does an indie developer turn to offer fresh new gameplay concepts and experiences?

By thinking far outside the box, Might and Delight’s emotional new title Shelter offers gamers the chance to take on the role of a vulnerable mother badger whom is being forced out of her nest and into the wilds of nature. It’s a game that channels classic literature like Watership Down, and through it we are encouraged to think on issues such as environmentalism and sustainability.

Motherhood. It alone is a thing of strong emotion. Having the responsibility for little ones who can’t even nourish themselves is a facet of life that we all experience throughout our lives – whether that’s direct (mother) or indirect (child) – yet only a mother can truly know the attachment that is felt to her own children. Mothers have a fierceness and willingness to endure and overcome all odds for her children, despite the risk to herself. Mothers take the time to stop and nourish her young and try their best to set them on the right pathways in life – the love of a mother is like none other. Human and bestial mothers alike share these very same traits in common.

As a mother badger with five little ones to care for, stepping into the wild means that for life to continue, a constant search for food becomes the top priority. As you travel throughout the world your childrens’ colour starts to fade to grey as you continually push forward into the unknown. Picking fruits and vegetables scattered about helps alleviate some of their hunger and restores their colour, but its the harder to catch animals like the frog and field rat that keeps them going the longest, and the ultimate goal is to stalk and surprise attack a small fox, which is a family feast for maximum nutritional value. 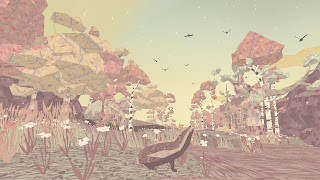 While food is of the utmost importance, it is also one of the easiest survival aspect of the game. Food is, for the most part, plentiful and not too difficult to track down, thanks in part to the game’s mostly linear level structure. It is the larger things in nature that are the most threatening. In Shelter, being a badger in the wild means that you’re suspect to a host of much larger prey. The talons of a predatory bird, the unseen predator that lurks just behind you in the dark of night and the rushing waves of a stream that must be crossed to progress forward all threaten the lives of your cubs. Each of the game’s levels has a start and end point, with no checkpoints in between; if and when one (or more) of your children are taken from you, they are gone… forever.

Levels are intentionally structured to keep you progressing forward on the right path and at a set pace, but they are cleverly designed in such a way that allows you a good deal of freedom to explore, with plenty of grassy foliage to hide from danger and stalk prey within, yet always ensuring that you don’t miss one of the major set pieces within the level. There’s never one specific path to get to the end, but you’ll always end up in the right place, which is a great thing, seeing how as your cubs’ hunger is a clock that is constantly ticking.

The game’s pacing is much slower than what modern players might be accustomed to, but like the level design, this is yet again intentional. There’s no scoring system, health bars or anything of the sort within the game. Aside from a handful of quick images that show you that you can pick fruit and take down prey, there isn’t even a real tutorial that fills you in on what you’re supposed to be doing in Shelter. Some will surely get frustrated from the onset, but others will find it wholly intriguing; it is the not knowing that keeps you on edge. For the sake of spoilers, I’m opting to not tell you anything about the game’s environments or any of the set pieces in this review, because it is these things coupled with the unique gameplay style that makes this title so special.

Might and Delight didn’t use up all of its creativity on the gameplay structure alone, because it’s created an art style for Shelter that I honestly can’t find the exact words to describe. Using a large and vivid colour pallet, angular environmental designs and a heavily textured papercraft aesthetic, the different environments charmingly blossom to life. The slow melodic interludes that make up the game’s soundtrack perfectly set the pacing when things are easy going, while ramping up in intensity at just the perfect times when danger is near. Regardless of the happenings, the sounds of nature can always be heard while playing the game: the wind blows in regular intervals rustling the leaves in the trees above, the soothing babbling of streams can be heard when near, and most animals can usually be heard frolicking about before seen – creating a deep sense of immersion that will quickly find you forgetting that you’re actually sitting in front of your PC playing a video game. 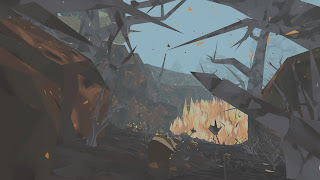 It is this complete immersion coupled with the constant fear of losing a child from the unknowns that stayed one step in front of me that kept me glued to my PC from start to finish in Shelter. A single playthrough only last a few hours, but within those few hours I felt a rush of such a wide array of emotions unlike anything that I’ve ever experienced in a video game: adoration at the game’s amazing visual style, respect to the developer for doing something so unique, humour at the young cubs in constant follows of my leading path, panic as my cubs instantly ran into the darkness and out of sight as a large predator approaches, relief and excitement as a perfectly timed approach finds a slain fox to feed my hungry children.

But then there are the solemn moments too, those moments when you hear that quick little cry for help and you know that in that moment, one of your children is lost forever; there’s nothing that you can do any more to save them. These moments build attachment to your remaining cubs. You start to make promises to yourself that you won’t let it happen again, but at the same time questioning if you can even fulfil that very promise.

Sadness. It is a powerful emotion, especially when you let the thing that created that emotion happen. I felt this in Shelter, and I’m ashamed to say that I felt it far too many times for my liking; I lost too many of my cubs throughout this journey.

Shelter isn’t a perfect game from a technical point of view and it certainly isn’t a game that will appeal to everyone because of that. At times, things in the environment have a tendency to obstruct the view while panning the camera and many simply won’t like the seemingly unstructured gameplay. But those who give it the benefit of the doubt will find that Shelter’s gameplay structure is meant to keep you guessing and by doing just that it creates an atmosphere where survival becomes the only option, just as it is for any mother in the wilds of nature.

Shelter is an emotional and heartfelt journey like none you’ve ever experienced before and it’s one that you will very likely never forget. Survivability takes on a whole new meaning when it places you in the role of a mother with defenseless children that need protecting. A video game that captures the emotions of motherhood – who would have thought it? Might and Delight did, and as I walk away from this unique title, I’m filled with delight that it did.