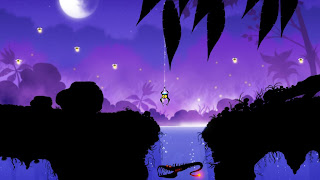 While some people panic at the sight of a spider near them, Enigma Software Production’s Alien Spidy puts players in control of an alien spider as he searches the planet Earth for a fellow companion. He will have to navigate through various obstacles such as bugs, bats, and deadly plants in order to reach his friend.

The physics-based 2D platformer consists of three sections, each offering multiple levels that challenges the player on speed, timing, and coordination. Each level has a challenge score that needs to be reached by obtaining orbs throughout the stage. Some of these orbs are impossible to reach with a simple jump, which brings up the spider’s ability to shoot out webs. These can be used as a swing when attached to a plant that allows the spider to reach high-placed orbs. The web can also be used on other surfaces to avoid danger or even fruits to distract larger predators in environment.

The graphics mirror the game’s friendly yet challenging nature by creating a cartoon-like environment full of plants and creatures. Leaderboards are presented at the end of each level that detail the player’s score, their friend’s score, and the necessary points to reach a higher star rating for the level. 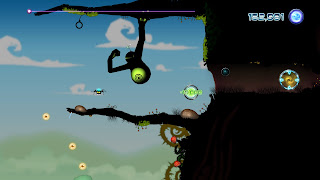 The game champions the idea of using momentum in order to advance through the levels. A level usually starts with the spider jumping off a high ledge, and the rest of it randomized. A couple of plant swings with the web that leads to jumping off a mushroom to reach a higher point is one of many scenarios that can occur. If the movement coordination is executed perfectly, it can make that particular moment extremely satisfying. Unfortunately, this happens rarely to the point of frustration as the player advances through the game.

As more obstacles appear, the more accurate momentum is needed to slip past deadly bugs and plants as well as obtaining the necessary orbs to proceed. An early web shot could result in a short web that allows safe passage from obstacles, but it makes it tough to reach all the orbs around that plant and vice versa. Various power-ups to make the spider jump higher or run faster are included at some points in the level, but even the use that requires a fine-tune precision, especially when the path in front of the player is narrow. In addition, dying and returning to a checkpoint comes with a loss of some points which could make the difference between reaching the challenge score and restarting the entire level. All of this should have been fun for the player, but instead each point loss and death becomes even more and more frustrating to the point where playing through the game doesn’t seem worth it at all.

Despite Alien Spidy’s cute character and attractive levels, the fact that the gameplay is a lot more difficult than it should be diminishes the fun of collecting orbs and dodging obstacles. It requires a level of precision that will attract a small group of people. Unfortunately, it will make most players angry to the point of throwing the controller on the floor.

Ready to battle it out? Dragon Ball Z thinks so