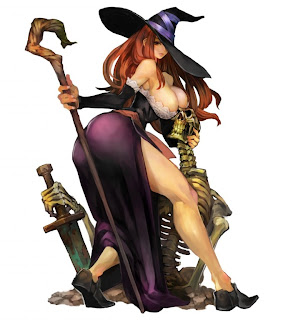 I can’t say any of the following chain of events surprised me: Dragon’s Crown gets released, and gets a positive write up from IGN, Gamespot and other sites who see it as their duty to simply tell audiences whether a game is fun or not.

Polygon takes the game, and because Polygon has a slightly more academic bent to it, the writer decides to make note of rampant objectification in the game gives it a lower score.

It’s best that you don’t read many of the comments on the Polygon article (much less the Twitter activity on the author’s feed @Danielleri) for your own sanity, but it’s safe to say that it’s filled with less-than-pleasant commentary about the author and the legitimacy of the review.

And then other websites with a known penchant to rage out against any kind of feminist criticism (and I don’t think it’s a coincidence that these sites are also populated by a dominant demographic of children and teenagers who can’t possibly have studied feminist critique in order to understand it) have since picked it up and run with it. Polygon isn’t the most popular of websites right now amongst the mass gaming community, it’s safe to say.

So here’s the thing that these people just don’t get; to hurl abuse at someone because they’ve written a feminist critique of a game is to argue that games are not art.

The point of art, and the reason art is so valuable, is that it creates conversations around it. Those conversations don’t have to be pleasant, they can be critical, and through it we come to better understand the artwork and the context through which it exists. For example: academics have been having conversations around the novel, Heart of Darkness, and its racism for years. It’s an important book to read for anyone who likes literature. It’s also undeniably a work of art, but understanding and criticising the racism and context in which the author, Conrad, wrote it is important for understanding the book itself.

A film like Battleship Potempkin is a crucially important film when looking at the history and development of film, and was also a piece of Soviet propaganda. For film students studying it (and sadly it seems to be only the film students that watch that one, because it’s a great film), looking at it within the context of a piece of soviet propaganda is important for understanding the film and the influence it had.

What am I saying here? Art doesn’t get to exist in a vacuum where we say “it’s art” and it’s then immune to criticism. Art needs to be subjected to scrutiny and context in which it was made needs to be discussed in order for it to realise its potential as art. The social impact and value of a work and its aesthetic or entertainment credentials are not mutually exclusive in its status as art. A book that is well written does not immediately qualify as art. A film that is well shot, likewise. Stuff becomes art under two conditions; 1) it in some way is part of the broader social conversation and 2) people write about it and debate over it as such.

Feminism is an important movement in academic discussion. It’s not the feminisim that the typical troll at NeoGAF understands it to be. Feminism concerns itself with the way both men and women are portrayed in art, and questions the motives and social implications of these portrayals. To feminism the male power fantasy is as much a concern as female objectification, and it’s for much the same reasons; because it represents unhealthy expectations and attitudes towards what is considered “ideal” by both genders in society.

Feminism is concerned with Dragon’s Crown, because it clearly features both male power fantasy and female objectification. Now, it might well be that Dragon’s Crown is justifiable in featuring male power fantasy and female objectification because it engages with that theme on a deeper level in some way. For another example in the games industry – Lollipop Chainsaw is on the surface filled with objectification, but because the game so cleverly twists the expected gender roles around and spends a great deal of its time making fun of anyone that goes looking for titillation, there are interesting discussions that can be had around the game. I haven’t played Dragon’s Crown, but I would be interested to see and hear whether there is more to its character design than the objectification of both genders. From what I’ve read, there isn’t really, but I could also be missing the interesting and enlightening conversations around gender in the game because there are so many screaming children telling the big bad feminists to stop ruining their fun.

Trying to shut these discussions down – and that’s what people are doing when they attack comments sections and the author directly via Twitter – is essentially shutting down the discourse around the game as a work of art. It’s stifling meaningful and in-depth conversations for the most superficial one around the entertainment value of the game. Yes, it’s important that a game is fun, but this industry as a whole needs to start having deeper conversations about games if it’s ever going to join film and literature as a legitimate outlet for art.

All I can say is I’m glad, based on the comments that are on the Polygon review, that there do seem to be some people interested in having a meaningful discussion about games. Even if they disagree with the assertion that Dragon’s Crown is exploitative, there are some conversations out there that position the rebuttal as something more than expletives and/ or “go away, this game is fun.”

Now we just need to figure out how to make those voices the ones that are actually heard.