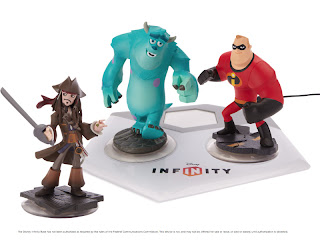 Disney Infinity is one of the more interesting games on the way from the House of Mickey. It’s a Skylanders clone in theory, where players will use physical miniatures of a range of Disney properties to summon characters into their console for play.

There’s going to be Tron stuff too, which is enough to sell me on the game and the miniatures, frankly.

Today Disney has also announced that there will be two companion apps that will support the console games. That dual-screen experience is really coming on in this industry, isn’t it? Below you can find the press release reprinted verbatim.

Activision’s going to want to watch out with Skylanders. It spent a fortune building up the concept of a collectible video game into a franchise that rivals Call of Duty in its stable, and now it’s going to have to contend with some of the most beloved characters in media history taking aim at the exact same demographic.

The Skylanders games have never done an especially good job in the mobile world, either, so if Disney can pull this off with fun, engaging apps then it’s going to be a real coup for its chances in winning the miniatures war.

Disney Interactive has unveiled two Disney Infinity mobile apps, Disney Infinity: Action! and Disney Infinity: Toy Box, which will provide unprecedented connected extensions of the console  experience. The apps will help make Disney Infinity one of the most connected, cross-platform game initiatives ever developed, giving players the opportunity to experience Disney Infinity wherever they go.
Disney Infinity: Toy Box
The Disney Infinity: Toy Box app allows players to build and edit new worlds from the Disney Infinity Toy Box mode on their iPad.  Players can also transfer any Toy Box creation between their iPad and console, allowing them to continue right where they left off, from any platform. When done playing on the iPad, players can then sync their Toy Box creation to their console game they will be able to unlock even more props, characters and decorations.   Disney Infinity: Toy Box will be available for free for the iPad in the coming weeks.
Features of the app include:
·      Intuitive multi-touch controls for building and playing the Toy Box mode.
·      More than 60 free items to build Toy Box creations – including terrain, track pieces and decorations.
·      The ability to transfer creations cross-platform for further editing/play.
·      Any item unlocked in a player’s console Toy Box will become available in the app.
·      Play with Mr. Incredible for free. Use web codes included with toys at retail or make purchases in-app to bring more than 20 of your favorite Disney and Disney/Pixar characters into the Toy Box app.
Disney Infinity: Action! App
In the Disney Infinity: Action! app, players become storytellers. Through the unique Movie Maker feature, players can bring Disney Infinity characters to life by creating their own movies starring themselves alongside Mr. Incredible, Sulley, and Jack Sparrow. Players will be able to choose from more than 30 different available unique animations and dozens of props such as Buzz Lightyear’s Jet Pack to create their own story.
Features of the app include:
·      Discover unique animations and use them in the Movie Maker to create your own movies
·      Choose from a high caliber cast of characters including Mr. Incredible, Sulley and Jack Sparrow
·      More than 30 animations to use in videos such as flexing muscles with Mr. Incredible, sword fighting with Jack Sparrow and scaring a friend with Sulley
·      Use props in your videos such from Disney staples like Tron and Toy Story
·      Share the movies by posting to Facebook or YouTube or sending via email
Disney Infinity: Action! Is available now for free on iTunes and in the Windows Store.  It will be available for the Google Play Store soon.
Share this

The new look Xbox One is a marketer’s nightmare