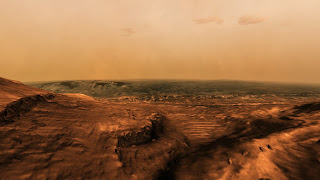 It starts with darkness and confusion.

The explosive crack of quick-release bolts. A sickening lurch. The barrage of jet engines. It’s too dark to see. The viewscreen is faintly illuminated but nothing is visible beyond the glass. There is wind: an urgent, rushing kind of noise. We’re falling. Someone should do something, fast.

Lights. Turn on the lights. Suddenly, we have some context. This is Take On Mars, Bohemia Interactive’s new space-program simulator, and a Martian Rover has just been dropped from an orbital platform. The dim light reveals metal casing, the edge of a solar array, wires. Beyond that, a void. The sound of the wind is less worrying now. This is obviously a controlled descent. 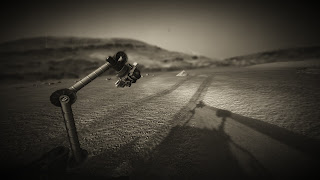 And then there’s a moment of revelation. Shapes appear in the darkness. The night-vision camera, initially a mass of pixelated green, slowly reveals form and structure. A line? A ridge. Part of a crater. It’s Mars. We’re landing on the surface of Mars.

Take on Mars is in the early-access stage right now, but it already succeeds in the most crucial respect: it captures the wonder and excitement of exploring a planet over 78 million kilometres away. Part of this is graphical trickery. In the early stages of the simulation, only the most ‘basic’ technology is available, so images are fuzzy, blurred and mysterious. Imaging modules improve as things progress, eventually leading to stunning full-colour panoramas. Games need a hook to keep your interest, and ToM’s is simply that it gets prettier the more that you play.

The simulation currently contains a couple of scenarios and the rudiments of a campaign. If you’re playing the full space program, each mission progresses in roughly the same way. Choose a place to land, select (or design) an exploration vehicle, get to the site and do some science. Completed missions unlock better technology, new vehicles and additional landing sites. It’s fairly repetitive stuff, but success also brings up a text box – unpopulated at the moment – in which the secrets of Martian geology are gradually explained. If Bohemia Interactive are smart (and they are), they’ll hire a top-class science writer to provide this commentary. Done properly, it could provide an extra level of reward to keep players gripped as they grind their way to the more interesting locations featured later in the game. 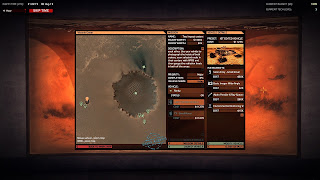 It’s the scenarios which show this early build at its best. These feature larger Martian Rovers with those all-important hi-res cameras and a greater array of scientific equipment. The landing locations are fairly spectacular too, with enough craggy terrain to put a severe dent in your shiny new Rover and showcase the damage model to the full. Taken together, the scenarios and campaign currently contain around five hours of interesting exploration before repetition sets in.

Take On Mars is a simulation for those who felt a sense of romance when they first saw the images from NASA’s Curiosity Rover. As software, it still needs polish, content and narrative. However, as an early-access build, it provides a stable and bug-free experience, and it hints at greater things to come.

Disney Infinity is going mobile, too