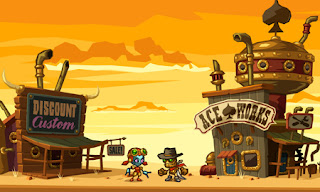 Nintendo’s first attempt at a handheld download platform, DSiWare, wasn’t one that put up many classic or memorable games. There were a handful, though, such as the Art Style games or more experimental puzzlers like Spin Six.
SteamWorld Tower Defence was one that came so, so close. As its name suggests it was a tower defence game that was notable for a stylish steampunk setting and gorgeous graphics. It also struggled with some ridiculous difficulty spikes that made the game near-unplayable for any but the most committed.
So I’m glad to see the developer, Image & Form, come back with a second bite at this IP, because there is a lot of potential in SteamWorld, and a game like SteamWorld Dig does a far better job in realising this potential. 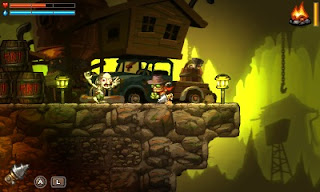 This time around the game is a puzzle platformer, with more than a few passing references to the Japanese arcade classic, Mr. Driller. The player assumes the role of a robotic miner, and needs to slowly chip his way down to the depths of a mine filled with ore for riches and… well, that’s about it, actually. To say that the plot of SteamWorld Dig is underdeveloped is an understatement. With most platformers that would hardly be an issue as people don’t play these games for their narrative depth, when the game features such a stunning steampunk art style it’s difficult not to feel that Image & Form really missed an opportunity to introduce gamers to something truly compelling here. Who knows… perhaps they’re holding on to the narrative for an RPG or adventure game down the track.
In the absence of a compelling narrative SteamWorld Dig instead keeps players keen by forcing them to work on the clock, and providing them a steady stream of improvements to make them feel like they’re making progress. When in the mine players have a limited source of light. Run out of that and there’s trouble. Carting loot back up to the surface earns players money which can be exchanged for upgrades and one-shot items like lanterns and ladders to get them out of a pinch. 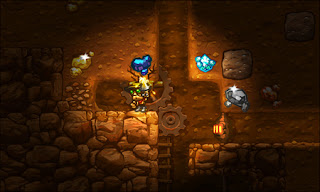 When mining players will also need to watch out for falling blocks and figure out paths to make sure they’re able to grab the most amount of loot possible. That’s the puzzle side of the game. Every so often players will also come across a cave within the mine. These caves tend to also introduce platforming sequences, and some of them require quite a good deal of precision. The platforming engine doesn’t handle this so well – jumping is too ‘floaty’ for that, and is the sole gameplay weakness in the overall package.
The mining itself is addictive, with a constant stream of loot and monsters to deal with. Anyone who has played Dig Dug or Mr. Driller will know roughly what is involved with SteamWorld Dig’s digging, though the addition of items and powerups helps to keep that core gameplay more varied, and of course this game goes the extra length of keeping environments changing as players dig deeper. What also helps is the stunning art style, which is crisp and used the 3D effect to subtle, but gorgeous effect, as well as the music, which is looped, but effective. 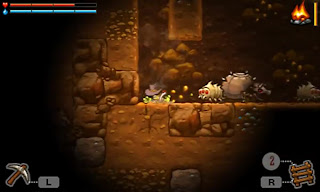 Everything comes together in SteamWorld Dig to offer an immensely attractive package, as it did in SteamWorld Tower Defence. Unlike that game, SteamWorld Dig doesn’t then shoot itself in the foot by hitting players with insane difficulty spikes. Instead, this one offers a fair challenge but one that is manageable, and most people won’t even notice the difficulty scaling because their own skill with the game should scale to match.
If only Image & Form would take advantage of the incredible storytelling opportunities that steampunk settings allow. Then they’re really be on to something. As it is, SteamWorld Dig is a far better balanced game than its DSiWare predecessor and shows a maturing of the developer, who is only a couple of games old. At this rate I really can’t wait to see what becomes of a third or forth SteamWorld; I think we’ll be in for something special.