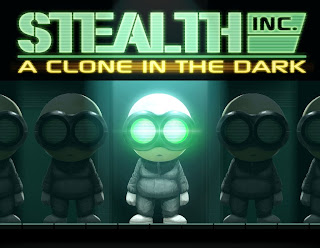 Stealth Inc: A Clone in the Dark sneaks its way onto the PlayStation Network and brings its unique mix of puzzle/platforming and stealth-based action onto both the PS3 and the Vita, packing the much beloved cross-buy and cross-save features right along with it.

This is a game that stands proudly on its heritage and places itself right alongside the many other great indie titles that call Sony’s network “home”.

Leading up the its release, the common sentiment that I’ve seen across the Internet goes along the lines of: “I’m not really a fan of stealth-based games.” Splinter Cell, Metal Gear Solid and the Thief series are some of the best stealth-based games in the genre, but these games are poor representatives of the action that is found in Stealth Inc. The idea that you will stay crouched and hidden away in the shadows for minutes at a time, waiting for that perfect time to strike, well… that doesn’t really exist here. Instead, what we do find is a fantastic mix of puzzle-based platforming action, with the core element of the level design being the creative use of shadows (stealth) – hiding you from the watchful eyes of threatening foes – allowing you to properly navigate the treacherous levels; it’s rare that you will stay hidden for more than a few seconds at a time. 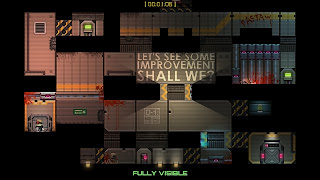 Your expendable avatar in the game is a glasses wearing clone, where the colour of its lenses alert you to how visible you are in the environment. Death comes rapidly and often in Stealth Inc, seeing how the devious level design will not only test your platforming and timing skills, but it will also test your mind as well. By this, I mean that the solution to levels’ puzzles isn’t always discernible. This means you will have to explore the levels, which will find your clones falling into spiked insta-killing pits, zapped by lasers, shot down by turrets, and all sorts of other nasty endings. This type of gameplay has its frustrations, but thankfully, much of it is alleviated by instant respawns that typically place you right before your mishap. Also, the game’s cynical sense of humour that finds white letters appearing on the walls to jest you when you meet an untimely end makes the abrupt deaths quite funny at times.

Levels are fast-paced and short-lived, with later levels still only lasting a few minutes each, which makes the game fit perfectly on the Vita. The graphics are sharp, and unexpectedly dynamic in feel. This is because a level can, in fact, be large and intricate, but only small parts are shown on-screen at a time. The rest of the screen in enveloped in pure blackness, and as you progress the next part of the level emerges by sliding out from the darkness. It’s a simple gimmick, but one that works so very well, as the dark outskirts of the screen contrasts perfectly with the shadows within the level that you’re utilising to stay alive. 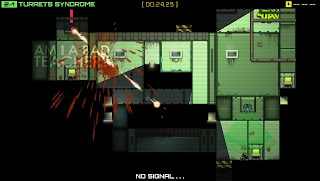 The game starts out quite simple, finding you merely using the shadows to evade a few enemies, while flipping switches to make your way to the exit. Before long, you’ll be pushing blocks, jumping through portals, manipulating platforms under mobile enemies to navigate them to desired pressure switches and even transversing some Super Meat Boy tough platforming sections. The level design featured here is ingenious, with each new set of stages putting forth a new set of gameplay elements into motion – keeping the gameplay fresh and constantly rewarding as you progress. Each set of stages is also topped off with a boss stage, which finds you having to put everything you’ve just learned in that stage to use against a giant turret that will evaporate you near instantly if it sees you.

While these levels are extremely challenging, they always leave you with an immense sense of accomplishment once overcome. Once you’ve completed the main game, there’s a still a lot left to be had here. Levels are meant to be completed with the lowest amount of deaths and the shortest amount of time. By doing so, you will unlock new clone types for each level that will help shave seconds off your time. The clones feature new abilities like invisibility cloaking and creating a holographic images to distract enemies. Online leaderboards are instantly visible upon selecting a level, so for the speedrunning types out there, there is even more longevity to be had here. There’s also a level editor to create your own levels to sneak through, which is great, but sadly there’s currently no way to share them with others.

Stealth Inc: A Clone in the Dark brings its fast-paced puzzle/platforming and stealth-based action to the PS3 and the Vita with much success. While its cynical sense of humour will keep a sly grin on your face, the gameplay is sure to rack your mind and your challenge platforming skills. Regardless if you are a fan of indie games or not – don’t let this stealthy indie title give you the slip.

Activision buys itself out for $8.2 billion