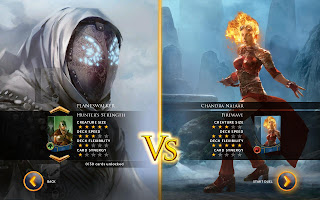 Magic: The Gathering has been around for a long time – and I have been playing it for a long time myself. I first got into it as a freshman in college back in 1994 right before the Ice Age set came out the following year. There have been digital versions of Magic: The Gathering on and off through the years, but the Duels of the Planeswalkers series has become something of a regular release now (you can see our reviews of 2012, 2013 and our iPad review of 2014), often coinciding with the physical game’s upcoming releases as well.

To that end, the Duels games have served several functions for Wizards of the Coast. They can often serve as a marketing tool for fans of the physical card game, showing off some soon-to-be-released cards, and also having some sort of promotional package included as well. When you fire up the game you are shown a promotional screen with a website and code you can plug in to take your cards to an official MTG shop and get a smaller booster pack of cards – something I plan to take advantage of in a day or two myself.

The Duels games also serve as probably the single best learning tool for those uninitiated with the card game. You absolutely cannot find a better tutor for newcomers to the series. My son started playing about a year ago after giving the Duels game a try. He loved it, it taught him all of the basics without the need to worry about this or that interpretation of the rules, and now he plays the physical card game with me as well.

Probably the group most often left feeling a bit on the outside looking in are the veteran players of the card game, because the lack of deck editing has long been seen as the single greatest deficiency in the Duels games. You could make some modifications here and there to the decks you unlocked, but never truly could experience the joy in building up your own deck just how you wanted, and the feeling of satisfaction when you won with it. 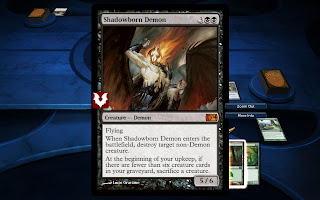 The new Sealed Deck mode in Magic 2014 really helps to alleviate that, as it plays out just like you might expect given the name. You start with six non-randomised cards to build up your initial deck with. For newcomers to the series, there is a pretty competent deck builder the game can provide for you, but for those of us who are veterans to the series, we can manipulate our decks just how we want. Participate in the campaign mode and unlock new randomised booster packs that you can add to your deck. Without a doubt this is my favourite mode in the Duels games yet, and a satisfying way to spend my time.

There are plenty of other modes out there as well. There is a basic campaign mode that works similar to prior years in that you take on a handful of challenge encounters before taking on another more powerful deck. Each time you best someone with your deck of choice, you unlock a card for that deck you were using. Best one of the boss opponents, and you can unlock a whole new deck. This is probably the single best way to learn Magic: The Gathering, by playing through this mode and its tutorial section (which can be skipped of course, if you’re a veteran).

Other modes include competitive and cooperative modes like one-on-one duels, two-vs-two matches, and free-for-all. A lot of the interface options have been improved upon as well. I love the option for attacking with all of your cards on a single button/ key press. Navigating and managing your decks of cards is easier than ever as well. It also feels like the timings have been tweaked just a bit, and the game plays along very smoothly. 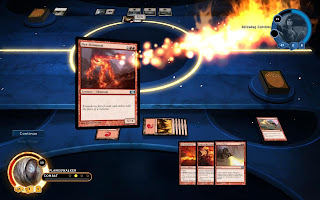 The music and sound effects have never been particularly amazing, but I enjoyed the score well enough while I mulled over my options during play. The visuals are about as good as you could hope for given the nature of this game. The artwork in Magic: The Gathering is often amazing, and it is faithfully represented here in its digital form. I also happened upon some cards that had these faint panning/ zooming effects in my deck. They were a neat change of pace while little bursts of light and particle effects top the matches off.

This is probably the best story the series has tried to tell as well. There is a lot of rich history and some very cool stories nestled into years of flavor text on the cards, but the games have generally glossed over this. The tale told here is not the greatest seen in a video game, but it does give you some extra incentive to see the campaign through. As if that was not enough, there are the achievements to give you some additional goals to strive for as well.

I cannot really give the nod to one platform over the other. They all play well, but the mouse controls do feel just slightly more natural with card selection and zooming in and out than, say, the PlayStation Controller. I managed to get online games on both platforms pretty easily and never had any crash or performance issues with either. Everything looked and played just fine, whether it was on my 26-inch computer monitor or my 52-inch television.

This is the best in the Duels of the Planeswalkers series yet and making it very easy to recommend to fans of the game.