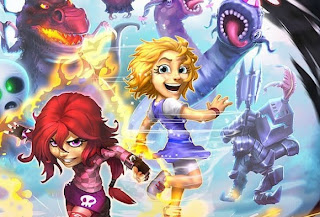 The Great Giana Sisters originally hit stores in the 80s and, as the amusingly plagiaristic title implies, put its own little “spin” on the Super Mario Bros. formula. Its tweaks were deemed insufficient by Nintendo’s legal department though, leading the publisher to eventually withdraw copies from sale. The series returned roughly two decades later in the form of a spiritual successor on one of Nintendo’s own consoles. Though it sought out its own identity, many found it to be fairly standard genre fare.
Giana Sisters: Twisted Dreams is not just another entry in the series but that final step in the franchise’s fascinating transition from shamefully derivative to legitimately soulful. Though it still retains many of the standard trimmings and rules of traditional 2D platformers, much of its ingenuity is born from a new dual world mechanic.

Giana herself changes to juxtapose the atmosphere she currently inhabits; “cute” Giana exists in a tattered and torn world full of demons whilst her spunky alter ego ventures through beautiful greenery occupied by far friendlier, feathered adversaries. It may sound cliché to use a variation of a “good and evil” system, but it works faultlessly here.

The player is free to manipulate their surroundings and character with a mere tap of a button, though the controls do have something of a learning curve. While there is one button dedicated solely to flipping the world, the trademark attacks of both the punk and cute variations of Giana each have their own buttons. This means that if you attempt to do a mid-air twirl as punk Giana, you’ll inadvertently shift the world in the process. The game does a respectable job of communicating this through both its design and informative loading screens thankfully, so I wager most will be able to grasp what initially gives the impression of being a clunky setup. 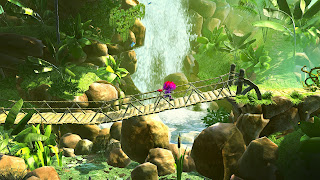 The only real “issue” with the world swapping mechanic then is how frequently it is required. While a platformer like Super Paper Mario used its 3D mode to solve puzzles and add a new dimension to the gameplay, the core of it was based around dextrous consideration of when to shift. With Giana Sisters, it’s used for everything from puzzle solving to basic navigation of each level, meaning the incessant transitions may begin to lack impact and marginalize the initial feelings of grandeur. It also means the music tends to slide around too (unless you decide to have it permanently set to the world of your choice for consistency).
The world mechanic is far from the only thing that sets Giana Sisters apart from the indie platformer crowd, though. There is a greater emphasis on collecting jewels in each level than most other games care to implement. It’s a bold move to attempt, considering that said titles run the risk of degenerating into bland collect-a-thons, but Giana pulls it off perfectly due to its clever structure.
In general, the level design has a degree of openness and depth to it that, however rarely, borders on being Metroidvania-esque. Stages contain several branching paths that exist not merely for variety but to reward the player with additional jewels and collectible art gallery pictures. It’s not that these spoils are hidden so much as they’re out of the way and require skillful manipulation of both worlds to attain. You’re thankfully never pressured into collecting everything since the game is rather lenient, but it grants the more dedicated crowd a reason to test their mettle at every opportunity. 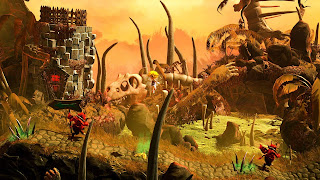 The main course should still prove to be more than sufficiently entertaining, given that it incorporates a balance of puzzle elements and straight-up platforming to keep players on their toes. Boss battles, though few in number, require dextrous solutions and reasonable prowess to overcome. It’s an incredibly even-handed approach to a platformer, full of plenty of checkpoints but still challenging. Newcomers should survive the core game’s difficulty while purists can divert from the main course and truly revel in the game’s hidden depth.
Though this is by no means a major flaw (especially considering the well-built structure of the main game), it is worth noting that the bonus hardcore modes are fairly irrelevant due to the game’s construction. There are two types of modes on offer that punish the player for getting hit by sending them back to the beginning of the stage or, in the case of “uber hardcore” mode, the beginning of the game itself. Since the levels are so lengthy and necessarily forgiving though, the whole concept of this mode seems contradictory to the game’s projected vision.
It would be remiss to neglect the game’s gorgeous presentation and score. The soundtrack perfectly augments the theme of two worlds by having two sets of songs based on a central theme. One features a more traditional and friendly soundtrack authored by the composer for the original The Great Giana Sisters game while its contemporary boasts a more foreboding vibe courtesy of Swedish metal band Machinae Supremacy. 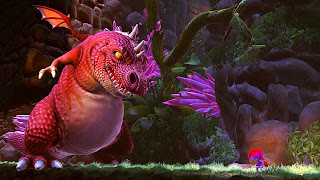 Though the game’s menus could use a little more polish, the same cannot be said of the wondrous high definition dragons, owls, and background scenery witnessed throughout the adventure. Those who appreciated the graphical style of titles such as Trine will find themselves right at home here. Much to my chagrin though, a scarce few environments manage to disguise the appearance of obstacles due to the highly organic look, causing illegitimate deaths. These should disappear quickly as the player becomes familiar with the laws of the game, but it can certainly be vexing at points when on a no-death streak.
Giana Sisters: Twisted Dreams is a terrific game not made brilliant just by its world-altering mechanic but by a fresh type of level design that has gone largely unexplored. A few noticeable kinks prevent it from attaining total supremacy, but anyone seeking a platformer that manages to be simultaneously traditional and innovative ought to give it a whirl.